Welcome to The X Factor Final 11 results show! Tonight, the two acts with the fewest votes will be revealed and they will have to sing it off with one act going home. By the end of the night, we will have the Top 10.

The show gets on the road quickly with a group sing of Save the World Tonight by Swedish House Mafia. On top of preparing for their own acts, contestants have to also prepare for the group sing thing. And the bottom two acts will also have to be prepared to sing once again! It must be grueling for all of the contestants, doing this every week, with the only respite being taken off the show altogether.

The group sing, of course, has individual solo bits where the crowd sometimes cheers for a favorite, along with others doing a chorus. The song abruptly changes pace with Astro joining in and it goes all chorus-y after that. They really don’t mesh too well as a whole and, as we found out last week, it’s being lip-synched to pre-recorded material. Thankfully, it’s a short, forgettable performance. Nothing to see here.

L.A. apologizes to Melanie for being a little too mean to her for last night’s performance because he “was jealous” (of Simon, we presume, since he’s the one smiling at the comment). We get some snippets of last night’s performances and judges’ comments, along with some behind-the-scenes clips of the contestants with the judges, family and friends following their performances.

We’re also invited to participate in the production of a Pepsi commercial through The X Factor web site (see link at the right). 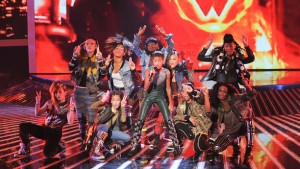 The first special guest is Willow Smith, performing Fireball. It opens with a flaming background and flashing red lights. Willow looks like an elf out there on stage in that green outfit, with the hair slicked back so much that the ears stick out. It’s a hip-hop, thump-bump kind of song, complete with a line of dancers surrounding Willow. It’s a crisp and quick performance full of energy, fun to watch. Standing ovation by the judges along with a long applause the the audience. 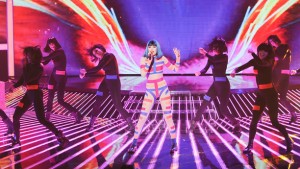 Next up is the second special guest, British superstar Jessie J, with Domino. Yikes, her body-fitting outfit looks like someone wrapped her in giant sticks of Tootie Fruity striped gum. The song kicks of with a trio of kettle drummers whacking a beat along with a deep base. A line of dancers follow her around as she hops around on the stage, singing. The flashing lights and visual effects follow the beat, assaulting our retinas. She looks out of breath after that performance!

Now, it’s time to reveal who make it through… “the results right after this break.” Ok, give us a break, will ya? We’re half an hour into the show and, of course, not a single result has yet been revealed.

Without further ado (and skipping all of those silences that fail to add any semblance of suspense), going through “in no particular order” (said twice) are:
Stacy Francis
Astro
Melanie Amaro
Marcus Canty
LeRoy Bell
Rachel Crow
Josh Krajcik
Drew
Chris Rene 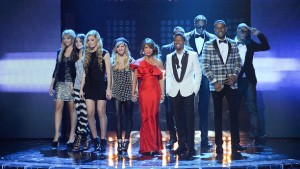 The Stereo Hogzz (again) and Lakoda Rayne at now at risk of going home and have to sing for their survival. Steve Jones asks Paula how she feels, saying “this is a nightmare situation.” “It is,” Paula replies, “it is a nightmare situation.” She says she’s proud of them and would not have wanted any other category, although it’s almost certain Groups will be extinct within the next week or two. It’s just that Americans don’t seem to care to cast votes for groups in a show like this.

Lakoda Rayne begins with No Air by Jordin Sparks and Chris Brown. They’re already looking scared. It also sounds like they haven’t quite practiced this long enough, as they’re not in harmony, with someone flat throughout. The louder they are, the more obvious it is. Nice try, but far less than stellar. Less than that even. Scorecard: C for a mish-mash vocal performance where the vocal tones and notes didn’t mesh well at all.

Then it’s The Stereo Hogzz, who are in this position for the second straight week. They sing You Are Not Alone by Michael Jackson. It’s a simple song with a slow beat, woven in well-crafted harmonies that these guys are best at. Dressed smartly in suits, showcasing their vocal talents, they look as professional as they sound. It’s a surprise they’re even in the bottom two acts, but blame that on the voter demographics, not these guys’ talents. Scorecard: B+ for a fine performance that no doubt was put together on short notice. 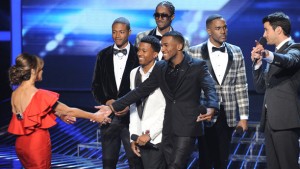 For the second week in a row, poor Paula. The other judges don’t make it any easier for her. L.A. and Nicole begin by voting for The Stereo Hogzz to leave. Network time’s running out. Paula complains, “I’m not going to do this” pleads to forfeit her vote. This would send the Houston boys home, so she decides to vote against Lakoda Rain. Simon can either send the Stereo Hogzz home or leave it to the vote. He casts the third vote for The Stereo Hogzz’s elimination.

Whut? There must be something we’re not seeing behind the scenes because these guys are clearly the better act on the stage, but it’s been decided now. Kudos to The Stereo Hogzz! You guys are cool. Keep at it and you’ll go places.

Next week, will we end up saying goodbye to Paula with the possible elimination of the last group, Lakoda Rayne? Obviously she won’t be eliminated herself, but she’d be reduced to the role of being a commentator and last place act voter, no longer a mentor to any of them. 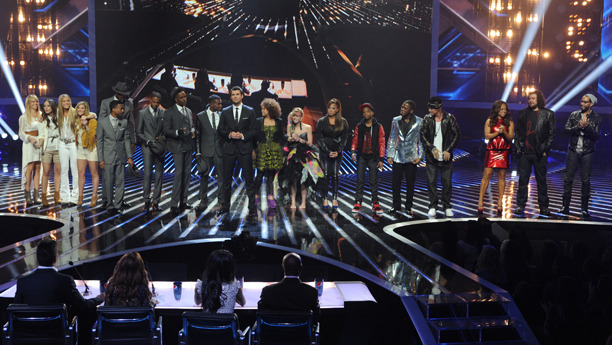