In the world of faith, folks often point out the obvious fact that God does not belong to a particular creed, religion, race, or school of philosophy. This sentiment establishes the divine as one which transcends divisive terms of affiliation.

But I am here to announce that a brief exploration of at least two religious traditions from both the East and West suggests otherwise. 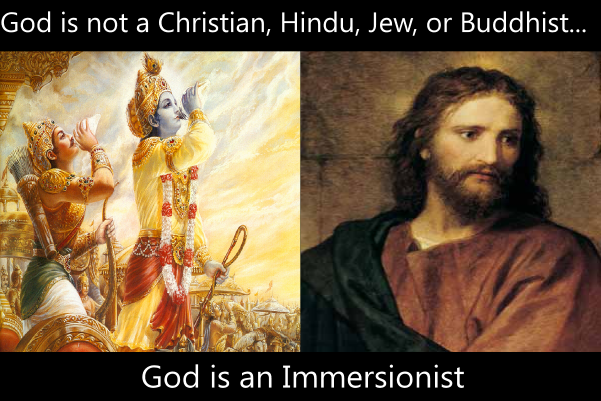 The image above hosts artistic depictions of two of the world’s most famous and beloved divine figures: Lord Krishna and Jesus Christ, respectively. While the terminology of their carnal nature varies slightly (Lord Krishna is one of several avatars of Vishnu, while Jesus is the sole incarnation of Yahweh), both are believed by their devotees to have slipped into humanity, for some time virtually unnoticed, and altered the lives of millions.

Similar figures from other spiritual traditions notwithstanding, Lord Krishna and Jesus Christ have much to teach us about the Immersionist path as they practiced in its ideal form.

In the Gospel of John of the New Testament of the Bible, the opening verse states that:

“Whenever dharma declines and the purpose of life is forgotten, I manifest myself on earth. I am born in every age to protect the good, to destroy evil, and to reestablish dharma.“–The Bhagavad Gita, 4: 7-8

True to the Immersionist Path, we find poetic irony in the stories of Jesus and Lord Krishna. Although they both arrive as God in the flesh, with all the power of the cosmos, the humility of their earthly station dresses them in cognito among their audience.

Like water, they seeped into humanity, and nourished the lives of those around them from the inside out.

In order to understand this more easily, I’ll borrow from the wisdom of that classic Taoist treasure, the Tao Te Ching.

“The highest goodness is like water.
Water easily benefits all things without struggle.
Yet it abides in places that men hate.
Therefore it is like the Tao.“
–Tao Te Chang, chapter 8

Water is an important symbol in Taoist thought as well as in the teachings of Jesus and Lord Krishna. Jesus describes himself as “living water,” and Krishna compares himself with the ocean. Water also holds one of the twin elements within the Immersionist path: Water and Fire.

In the Immersionist path, water is both the element one must emulate, and a representation of each immersion exercise. You must become like water (the ease of flow into another life or point of view) whilst flowing into a particular deposit (the individual or ideal) of water. 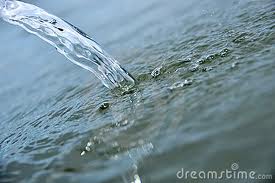 The Immersionist Path may require one to explore areas within ourselves and others which prove uncomfortable, however as we see from the Taoist verse above and the example of God’s incarnations, water always seeks the lowest place.

Indeed, Jesus was born in a feeding trough, while Lord Krishna arrived in a prison cell.

Paradoxically then, the Immersionist Path is simultaneously a simple and difficult path. Water does not bind itself from entering the crevasses of life, nor does it discriminate whom its life-giving properties reach. As an Immersionist, we must be willing to go places others refuse, plumb the depths of our darkest selves, and nourish even that which seems hopeless.

Jesus and Lord Krishna arrived to show us the way, and I believe it was the Path of Immersion. In a way, the Lord and Creator of the cosmos is telling us “Come on in. The water’s fine.”

If that’s the case, if they’ve shown us the way by example, what’s stopping you from diving in today? 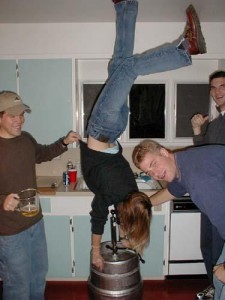 Immersion in Relationships: Five Ways to Bring your Relationships to Life
archives most recent
More from Beliefnet and our partners
previous posts