According to this kid, it’s for real.

Junior Garcia, a 19-year-old college student from Texas, decided in July of 2011 after a Christian youth group meeting to “…take up my cross. And I felt so strong in my heart. And I felt Him tell me where to go and how to go.”

His journey involves dragging a 12-foot cross 1,369-miles from Texas to Washington, D.C. along with family and fellow members of his Pentecostal church. The trip began June 7th and should conclude July 13th of this year.

This isn’t the first time someone has lugged a giant cross over a great distance in the name of their Christian faith. Arthur Blessitt carried his own cross around the world, covering 39,943 miles. It took the guy 44 years. Eat your heart out, The Amazing Race.

So where does such religious drive come from? What’s the impetus that transforms otherwise seemingly normal folks into cross-country crux carriers?

No surprise here; it’s the Bible.

“Then Jesus said to His disciples, “If anyone wishes to come after Me, he must deny himself, and take up his cross and follow Me.“–Jesus in the Gospel of Matthew 16: 24

There goes Jesus and his metaphors again. But was it really a metaphor? I mean after all, Jesus did bear his own literal cross and was crucified, according to the gospels of the New Testament. So did he really intend for his followers to do the exact same thing?

I don’t think so. Can you imagine the 1. something billion followers of Jesus toting twelve-foot crosses all over the place? Suddenly your office space just turned into a tangled pile of Lincoln Logs.

This is where a little bit of context and common sense come into play. In my humble opinion, I believe Jesus used “cross” as a variable in his sentence. In other words, one’s cross becomes the personal struggle by which you follow him. This battle between the literal and metaphorical is a constant feature throughout all religious traditions and is the cause of both wondrous demonstrations of faith and compassion, but also abhorrent demonstrations of myopic interpretation.

So was Jesus talking exclusively and literally about everyone taking up a cross? Probably not. His use of metaphor when talking about the same burden is demonstrated in the same gospel:

““You don’t know what you are asking,” Jesus said to them. “Can you drink the cup I am going to drink?”“–Jesus from the Gospel of Matthew 20: 22

Jesus is again using metaphor in speaking about his personal burden, just exchange “cross” for “cup.” Christians might easily have a chalice hanging on a necklace rather than a cross and it would mean just about the same thing.

So has this 19-year-old kid taken things too far? Has he taken this metaphor literally and made a foolish display of his faith?

No, I don’t think so, at least not entirely.

Some have suggested that it’s all for show, that it’s a publicity stunt. There were those who postulated the same thing about me during Project Conversion. I don’t know this guy personally, but I can relate to him on this level. No one does something like this for publicity. He’s dragging a wooden cross 1,300 miles and then praying in the nation’s capital. That takes balls, faith, and the absence of ego because there is no reason any sane person without an ounce of those three ingredients would do this otherwise.

My personal cross was Project Conversion. It was something I had to do, something I had to bear, and it changed lives–mine most of all–in the process. It changed lives because I was faithful to my burden even when I wanted to quit. This kid is doing more right now than so many out there. Junior Garcia is making the journey of his life at the age of 19 when other kids are sitting on their ass playing video games, stuffing their faces, or complaining of boredom.

So I don’t think the argument should be over whether this kid took Jesus’ command too literally, but how to animate our lax society into bearing a cause worth walking 1,300 miles for.

What do you think about this kid? Do you have a cross worth bearing? 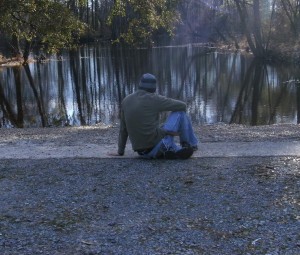 Part Two of Heather's Guest Post: "How Religion Almost Ruined My Marriage."
archives most recent
More from Beliefnet and our partners
previous posts