Calvin and Hobbes: An American Upanishad?

My wife Heather acts like she knows me. Maybe she’s seen the volumes of Calvin and Hobbes comics in my “book box” in the attic. Perhaps I’ve quoted a few lines or reminisced on fantasies over building disturbing snow monuments in the front yard. Either way, she sent me the following Calvin and Hobbes comic strip last night and assumed, correctly, that I’d love it. 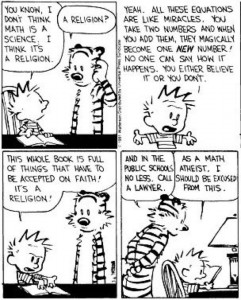 There are two reasons I said “Hell yes” out loud to this comic. One, because I love the correlation to the nature of religion, and two, because like my hero Calvin, I too am a “math atheist.”

That said, Calvin and his imaginary–if not rational–friend Hobbes was a comfort to me growing up. Like Calvin, I’ve always been a skeptic and at times, overly imaginative. He never quite fit in, and while I believe he secretly desired the company of others, was just as comfortable in the world of his own imagination. Calvin actively participated in the world around him on his own terms, in a capacity that was unabashedly and naturally him.

Ironically, Hobbes is an imaginary figure grounded in reality. He is a stuffed animal–a tiger, in fact. He represents a sort of gravity for the often rampant imaginative power of Calvin, although he is in fact, not real.

In a way, and I’m not sure exactly what the author’s intentions for Hobbes were, this stuffed tiger, animated in the mind of Calvin, represents our conscious self–that over-arching presence of rationality and morality. What’s fascinating for me is that Calvin, although he has the so-called “traditional family” with a still married mother and father, along with society’s normative positive influences, only discovers rationality and morality in an entity that for all intent and purposes, he brought forth or dare I say, uncovered in his own mind. To go farther, the manifestation of Calvin’s sense of reason and morality, although no doubt a projection of his subconscious self, is a presence he often submits himself to as in a master-disciple relationship.

Strangely enough, this modern exchange reminds me of the Upanishads, those timeless wisdom narratives between masters and disciples of the Indian Dharmic tradition. Their sometimes stressed and heated discussions over the mystery of life and the nature of the divine are seen here in our contemporary Calvin and Hobbes and force us to question the implications of our sacred texts.

Generations from now, will Calvin and Hobbes serve as a type of American Upanishad?

Some might balk at the notion, but the wisdom of these two fictional explorers is not lost on their loyal readers. In a word, it doesn’t matter if Calvin and Hobbes do not really exist. Just as Hobbes only exists in animated form in Calvin’s mind, and yet informs his sense of place, rationality, and morality, so do many of our religious stories and traditions inform us today.

Voltaire once wrote that “If God did not exist, it would be necessary to invent him.”

Is God, like Hobbes, a projection of our highest sense of morality? Have our various traditions granted personage to and animated rationality and the greater good? Are our notions of the divine, like Hobbes, a personal projection grounded in reality?

I don’t know the answer to these questions, but like Calvin, I am comfortable in my constant search for truth and an insatiable imagination which gives life to ideas. Hobbes, even with his gravity, allows Calvin’s speculation and curiosity to leap just high enough to gain the sensation of flight into his own fancies with the comfort of knowing he’ll never float away. If there is a God, that is exactly how I imagine it to be. 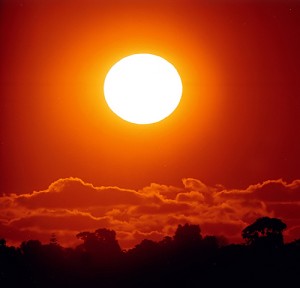