Have Our Holy Places Become Obsolete?

Is there a place you go where it feels like the entire cosmos channels through your body? Where the hair on the back of your neck stands just as your feet touch down on its surface? I had not one, but two such places during my journey last year.

This is the River Temple. For those who have been with me for a while, you know that this was “ground zero” for much of the crazy and ecstasy of last year. I had visions here. Nature and mystery came to life on this white, sandy peninsula of a river known for its polluted and deadly waters. It’s also where, in September, I got so creeped out that I ran out of the swamp and refused to return until the next year.

Here is the Warehouse Temple. It was an abandoned warehouse only walking distance from my home. This dilapidated structure became my surrogate temple once I abandoned the River Temple, however after standing for decades, a demolition crew began tearing it down in October of last year. It was here that I experienced the gravitas of the divine feminine through the Goddess when she asked if I thought I could lock her up at the River Temple. I blamed her for the destruction of the Warehouse Temple, but eventually made my peace with her.

What do these places have in common? First of all, they became sacred spaces for me during my journey through Project Conversion. I felt led and magnetically connected to them even during my conflict with them. Second, both were taken from me and utterly destroyed.

When I returned to the River Temple for my final confrontation with the universe on January 3rd of this year, I expected to sit on the white sands and officially accept my calling. Instead, the Temple was completely flooded and inaccessible. I was devastated, but eventually reached a moment of satori when I realized that the Temple never had the answers…I had carried them all along.

I left the river that cold January day and never returned…until three days ago.

I wanted to visit my old friend and companion–maybe even cross the tree bridge (a massive fallen oak that allowed me to cross the river) and sit in meditation for old time’s sake. Here is an image of the River Temple and the tree bridge in the summer of 2011:

And here is how I found River Temple three days ago: 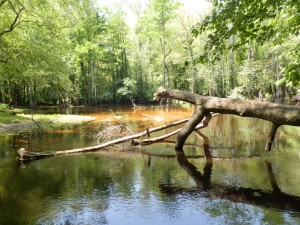 The River Temple remains completely flooded, and now, even the tree bridge has been ripped in half by rains, wind, and rot. I literally fell to my knees. And if that wasn’t enough, I discovered this on my way back home: 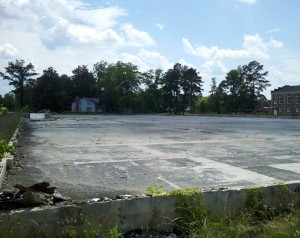 The Warehouse Temple, wiped out of existence.

My temples, my holy places, both reduced to ruins in one day.

I sat on the remaining half of the tree bridge with my feet dangling over the slow, black water and just…existed. All those times before, all the previous visits had had a purpose. Meditate, prayer, explore, escape from a noise of a householder’s life…every time my motive for being there was preloaded.

But now, I was purposeless.

And suddenly, everything came to life.

I’ve visited the river and its surrounding swamp countless times and have seen all manner of life, but had never run across a snake. All that changed three days ago. I saw not one snake, but five, all of which slithered out from the same spot near the River Temple and slithered across the water within a 10 minute stretch. 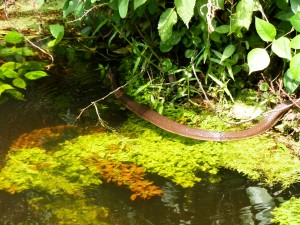 Snakes carry a great deal of symbolism in the world of religion. In the book of Genesis, it is a serpent which deceived Adam and Eve. Jesus asks his followers to be “wise as a serpent and gentle as a dove.” Lord Vishnu of the Hindu god of preservation is said to lay at rest on a massive serpent named Shesha after the dissolution of the world. The god Thor is predicted to battle the Midgard Serpent which rises out of the ocean to destroy the earth. In the legend of Lord Buddha’s awakening, the snake king Mucalinda rose from the earth and covered the Buddha as a hooded cobra from a great storm.

But I could only consider these things for a moment, because as the swamp blossomed with life around me, I realized just how foolish I’d become.

The River Temple, the Warehouse Temple, my constant musings and application of religious knowledge and symbolism to every event around me was an illusion–a facade. I had been wooed by the appearance of a thing. Then, as I came to depend on these structures and events, their transitory nature revealed itself with destruction and random occurrence.

And the river, the life consuming, struggling, and being consumed around me didn’t care. I was just another integral yet insignificant and transient piece of the world. My imaginings made me no better than the snakes in the water beneath my feet, or the ants gnawing into the rotting tree I sat on. My temples were ruins, and they only meant something because I infused them with meaning, with holiness.

As I sat there without motive or purpose, I realized in a flash of insight just how meaningless our temples, our churches, our sacred spaces really are. That is, until we enter them. The world–our existence–is inherently empty until we fill it with something. It’s why we call scribbles on a page, paint on a canvas, or images on a screen “art.”  Our holy places are this way, but what happens when they crumble or are overrun with Nature’s indifference?

But it goes much, much farther for me. If our churches and temples are simply walls subject to the transitory nature of dissolution, then they only bear holiness because we provide it. And yet some say–indeed many–that our bodies too are temples. Like my River Temple, our bodies break down, overtaken by time. But we don’t want to look at our bodies as obsolete temples, do we?

Here’s another dangerous thought. Are our believes and constructs of the divine also subject to this transitory decay and renewal? Are our religions simply structures–holy spaces of our minds?

I’ve never asked you to think as I do, I’m only here to share my journey, yet this experience–these constant reminders that nothing is ever as we make it out to be–are breaking me down more and more. If our holy places–including our bodies–are obsolete, then what does that mean for the idea of the soul or of purpose and reason? Is there any such thing as meaning or are we simply participating in the reflection of purpose we’ve cast upon the world? It appears that the world around us is a perfect mirror for such interpretive play, but I wonder what might happen if one day we turned away from that mirror and saw the world as it simply is…

When I took a step toward the edge of the tree bridge, the flesh of the tree crumbled beneath my feet. 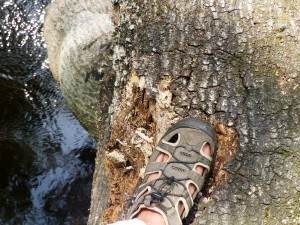 What does it mean?

…Or nothing at all. 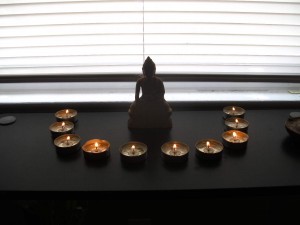 The Universe Lines Up: Vesak and Huge Moon Esbat
archives most recent
More from Beliefnet and our partners
previous posts