Showdown with the Temple: How Enlightenment and Purpose Never Arrive as Expected..

I knew this day would come. My showdown with the River Temple has been on my mind since I abandoned it in September, because no matter how hard we try to avoid it, our destiny/fate/karma/purpose will always haunt us.

The Temple represented a climax during each month. Here, I usually gleaned some powerful insight which propelled me into the next month. Upon reflection however, I started noticing a pattern: These experiences were becoming stronger and much more personal. By September, it was no longer just an experience, but a confrontation.

Gather ’round the fire, Congregation. I’ve only shared this with two other souls, including my wife. 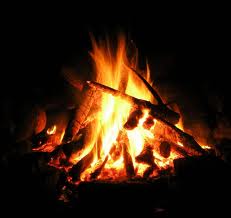 I was meditating at the Temple in September, reciting the Mul Mantra (the most important verse in Sikhi religion) for who knows how long. The concept of the omnipresent God filled my mind. After some time, I opened my eyes and everything around me had changed. Everything–the trees, the birds, the sand around me, the dark water, even the air–changed into pixels. Even my hand, when I reached out, took this form. I was overwhelmed by sensation. I felt everything.

The moment was so intense, the feeling so immense, it was like walking on two legs which had fallen asleep. It wasn’t painful, just overwhelming and unbearable. Then, a voice I felt more than heard said within me,

“This is the cornerstone of your purpose. You ready for this?”

I knew at that moment that I had a choice: Take this path or continue Project Conversion, but I could not do both. I could not give myself fully to this calling while also adhering to the remaining faiths with any fidelity. The pressure increased until I experienced an enormous weight, as if gravity itself had increased. The voice rumbled again,

I shook my head, gnashing my teeth and yelled, “No!”

Then, everything was still.

I grabbed my bag and Fravashi (my walking staff) and climbed over the tree bridge back to the opposite river bank as quickly as I could. Looking back only once, I ran out of those woods, vowed never to return, and wondered what sort of prescription medication I’d need going forward.

But our choices are not always so easy, are they?

No matter where I went to meditate: my back yard, an abandoned warehouse…the Temple followed me. I received clues and insights about my fate no matter how hard I tried to avoid them. No matter how deeply I gave myself to each month, I even began seeing this “purpose” through the lens of each religion. I soon realized that there was only one way to settle this conflict. I had to return to the Temple at the end of the year.

Once I accepted this final confrontation, thoughts and plans for the future of the Congregation and myself overwhelmed me no matter how hard I tried to shut them out. I was virtually powerless, and so I studied the founders of various faiths and realized that they too had reached a point where they knew they could never turn back and ultimately submitted to their fate.

By December, I’d given up the fight, and vowed to accept whatever destiny may come. I struggled daily to drop any of those ideas and theories so that my heart and mind would remain clear and receptive. I wanted not my will or designs, but whatever I was meant for.

In mid-December, I showed my Catholic Mentor the Temple from the tree bridge, only to find it partially flooded. Though it would prove a challenge to cross, I assessed that I could either walk through the water or at least jump from the tree bridge. Nothing would stop me from entering the Temple.

I set the date for January 3rd, 2012, fasted for three days prior, and made preparations.

I packed all my gear for the trip the night before: my bag (which goes with me everywhere) complete with notebook, pencil, water bottle, etc., Fravashi (walking staff), Jim (my k-bar knife), and a small linen sheet to sit on. I was ready for the Universe.

The morning of the trip, I kissed my wife goodbye as she left for work and gathered my supplies. Just as I had finished, something told me to leave it all behind. No bag, no knife…only the clothes on my back and the linen cloth. I tried to reason out of this, but the urge was too strong, and so I left my gear behind.

Driving and then walking toward the Temple, I felt exposed and vulnerable. The river is an unpredictable place and I’d need all my tools in order to overcome the flooded portion. I did my best to let go of my own understanding and trusted whatever might come.

This was what I found… 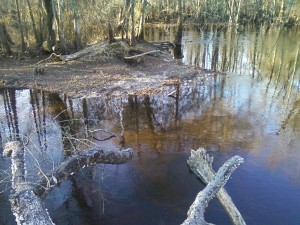 The image above is the Temple…what’s left of it. Compare this to the photo earlier in the post. The grounds are over two-thirds flooded. We’ve had no rain to explain this. I looked everywhere for a way around or across. Without a boat, it was impossible.

It was like the Warehouse Temple destruction all over again.

I felt betrayed and confused. Wasn’t this supposed to be our showdown? I couldn’t believe what I saw. I stood on the tree bridge, shivering in the brisk wind, and waited for inspiration. When nothing answered, I collapsed, sat on the bridge, and stared into the black water flowing beneath me. 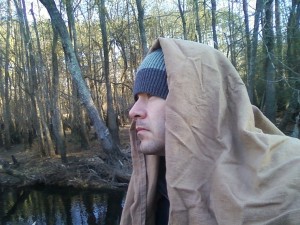 The Temple had become obsolete. It was my willingness to go–my offering of self–that mattered. Like Abraham who nearly offered Isaac, like the Buddha who took the Middle Way, like Muhammad who finally exhaled the Qur’an, like Jesus who accepted the cup, I realized exactly who I was and my purpose with a clarity which escapes description.

It didn’t matter. I offered my ego, pride, pain, struggle, trials, hatred, happiness, experience–everything on the altar of purpose and fate.

What I discovered was that all of those spontaneous plans and ideals, everything I had tried to avoid, were true and there existed something far more powerful and primal smack in the middle of it all. I didn’t need the Temple anymore because what I needed to know was already within me. God/the Universe/destiny/karma flooded my last idol and cornered me once and for all.

Enlightenment is knowing with absolute certainty who you are and what you are to do in life. My enlightenment began this day, January 3rd, 2012 on a cold winter morning sitting on a fallen tree over a dark, polluted river.

I am to be nothing, that I might be anything for those in need.

Declare an end to the war between and within the faiths–including atheism.

Join the various philosophies and religions in one cause (service to and compassion for all life) by virtue of their unique strengths.

Rebuild the Congregation as the body and vehicle of this purpose.

Free beer for everyone (secondary, of course).

This is my enlightenment, but it can be our shared purpose. In the coming weeks and months, I will rebuild the Congregation from the ground up and with the help of key members, set this calling into motion. Project Conversion and the era of spectatorship are over. If you have the courage and passion to be more than a follower, stay tuned.

We have a world to rebuild. 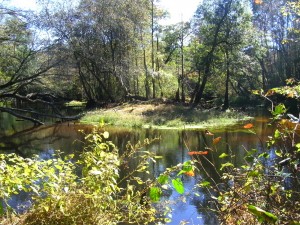 It Is Finished: Reflections on a Year of Religious Immersion
archives most recent
More from Beliefnet and our partners
previous posts