My Wife Snaps and Project Conversion Reaches the Edge…Or does it?

Yesterday, after 10 months and 3 days, my wife snapped. Since many monastic Jains do not typically bathe and I have opted to observe the monastic vows this month, this means I would not bathe either. The idea stems from strict ahimsa (non-violence). Because water itself has life and the surface of our skin as well, the act of washing harms life. Agree with it or not, this is the reasoning behind the practice.

Jain monks are also constantly on the move in very small groups (5 to 10) and stay at temples or meditation halls only a few days at a time before walking to the next. If there is any body odor, no one can tell because the monks themselves are never around long enough.

But that isn’t the case in my home.

I have no choice; I cannot be truly homeless this month and therefore my family is subjected to whatever practices I adopt. Some work, some do not. After three days of not bathing, Heather cracked, threatened to kick me out of the house, and basically turned into someone I’ve never seen before. Even the Congregation was stirred over the issue.

And it was all part of the plan.

That’s right, I set this up. I never intended to go a whole month without bathing. If I were single and had no other interactions with people, sure I could pull it off. But I have a family which requires daily interaction regardless of my practice. I actually predicted that my wife and Congregation would snap after a week, but the tensions boiled over in only three days.

Now I’ll tell you my motivation.

This is the first month where I’ve given my wife posting powers on the Facebook page (the Congregation). I wanted everyone to see what it’s like from her point of view, living with one of the most extreme monastic orders on the planet. She brought a perspective and nuance to the updates that folks had never seen before. This got everyone talking about the lengths Jain monks take in practicing ahimsa (non-violence), and it was more than just a conversation. Because I let Heather post whatever she wished, many Congregation members became concerned about my practice, and as tensions rose, we saw lines being drawn in the sand.

“Has Andrew gone too far?”
“This is all spectacle.”
“These are unnecessary practices.” 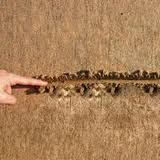 Just as the Congregation seemingly had enough, just as Heather emotionally cracked and had had enough of Project Conversion, I calmly asked her to listen. She did, and I told her my plan.

Lesson One: Jain practice and philosophy teaches us to detach ourselves from the slavery of emotional and physical stimuli. This process is called samvara. According to the teachings of the Jinas (those who have reached a perfected state of knowledge and liberation), karma accumulates on our soul and blurs the soul’s perfect perception, bliss, knowledge, and power. Because Heather and some Congregation members allowed their emotions and bias cloud their judgement, the process of karma accumulation snowballed out of control.

Some of us need to learn how to become masters of our thoughts and emotions…not the other way around.

Lesson Two: Some have said (including myself) that Jain monasticism is extreme and even unnecessary. One supreme quality Jains strive for is a perfect state of equanimity. That is, a state of absolute centered thought and presence. My first question to those who believe the Jain monastics are extreme is why? I noticed that those who think this live in a society of plenty where we can consume what we want, when we want, and in any quantity. It is a society of “more is better” and having “stuff” is the true bliss–even at the expense of others(including other forms of life). Perhaps you believe having absolutely nothing is an extreme because this station inhabits the far end of the spectrum you occupy.

What if we saw things exactly as they are and not through the fog of our own karma–our own emotional, cultural, religious, or political cloud?

Lesson Three: There is a reason monastic life is separate from the laity. The lifestyles just do not mix. A monk cannot operate within a householder’s context. But here’s what I want you to really look at. What I did, what I chose to do, was not an individual choice that I had to personally live with. It was a corporate choice that affected everyone around me. That, in my opinion, is the damage of extremism. We should not judge those who have made choices that only affect themselves. This includes monastics or folks who have chosen a personal religion or philosophy. As my dad used to tell me, “My rights end where yours begin.”

But when our spiritual or philosophic choices negatively affect others is where we have a problem. My situation of forcing a monk’s lifestyle on my family illustrated this point. Politicians who want to make laws in favor of one faith at the expense of another, one religious group wiping out a rival faith’s population, bullies at school teasing someone of a minority faith, judging someone’s personal religious practices (who affect no one else) as silly or unnecessary…these are ways in which we encroach upon others. This is the extreme we should concern ourselves with.

That being said, I will still practice closely as a Jain monk this month, however I will not do anything that hinders my family (including washing).

I hope this post gives you some pause and reflection today. Sure, it might have been harsh, but sometimes we have to be part of the experiment to fully appreciate the outcome.