How Killing an Ant Changed My Perspective.

The Jain concept of ahimsa (non-injury) prevents one from doing any harm to our fellow sentient beings. While the monastic order (Sadhus and Sadhvis) go to great lengths and austerities to prevent harm upon others, householders are encouraged to observe this principle as well. This is why most householder Jains often employ themselves in business, thus reducing their direct influence upon any loss of life. But sometimes, no matter how careful we are, mistakes happen.

I thought I was doing well this month. I’ve limited my travel by vehicle, eaten vegetarian, I carry my fly whisk, and I pay more attention to how I interact with my environment. Walking barefoot all the time means I’m more sensitive even to the ground. I’ve watched a mosquito bite me (and then tried to blow her away), picked up a spider off my arm by its silk thread–even my wife is now forced to kill any insects that come into the house, a job I formerly held. She’s not happy about her new duties.

No matter how hard we try, even with all the austerities we perform, we cause some form of harm just by existing. The Jain ideal of ahimsa is privy to this fact, I’m sure, and only seeks to minimize their impact. It is our awareness that matters in the end. All life is sacred and equal, and knowing this, we are more vigilant in our dealings with fellow jiva (living beings). In this way, any loss of life by a Jain’s hand is troubling.

Even if it’s an ant.

Trying to be a good and helpful husband, I performed my daily chores yesterday by cleaning the kitchen. This means washing dishes (I know I’m wiping out millions of bacteria, but I try to make it quick), putting food away, and cleaning off the counter. Toward the end, I placed some left over food in a plastic container and, not paying attention directly, fit the lid over the container. Just as I pressed down on the lid, I noticed a small ant within the groove of the lid. By instinct I gasped and pulled the lid away. I was too late, the ant was crushed.

Seems trivial right? I mean come on, it’s an ant, there are literally millions of them just like this one out in my back yard. No big deal. But wait, I guess it’s no big deal to shoot a homeless bum in the head either right? After all, there are billions of humans and by killing a useless homeless guy, you just did society a favor, right?

Thanks, Captain Obvious, but that’s not the point. My question is that if the death of this ant is trivial, at what point in the great tree of life does it actually start to matter? And given the fact that humans aren’t exactly known to treat themselves very well, who or what would want us acting as the arbiters of deciding which form of life is worthy of existing? At what point is it abhorrent to kill or is the death of another creature worth our attention and sorrow?

I’ve gone 15 days now without consciously killing something, so the death of this ant is a big deal. Regardless of its similar form, there will never be another like her. She was unique in the universe, a product of millions of years of evolutionary engineering. My crime wasn’t that I killed maliciously, but that I simply wasn’t paying attention. My careless behavior cost the life of an ant, but how often does careless behavior on our part cost so much more?

Today I will make penance for my mistake in the form of fasting and increased meditation time. This is a form of the ritual of Pratikraman, which means “return from violation.” The penance ritual is normally performed every morning and evening, however one may take a special penance if an error is committed. The process goes as follows:

So I killed an ant. Is it worth all of this? I’d say that short of bringing the ant (or any other creature) back to life, yes, it is. The important thing with any sin or trespass is that we fully and humbly acknowledge our error, repent or apologize to the offended party if possible, and make an effort to avoid that mistake in the future. For a Jain, even a harsh thought is an injury to another.

What harm have you done lately out of carelessness, malice, or an undisciplined mind? Perhaps you believe that your negative thoughts or innocent gossip is as harmless as crushing an ant. I’d say change your perspective. The ant, something seemingly small and insignificant, didn’t think so. I’ll bet the same is true about who or whatever is on the receiving end of your negativity. Meditate on that today and watch your perspective change. 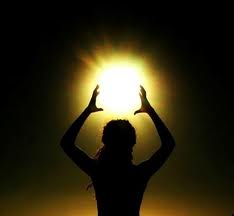 How I Faced Death and Why You Should Too.
archives most recent
More from Beliefnet and our partners
previous posts