One of the most pervasive jokes about United States Marines is how neat and particular they are. Nowhere is this concept more pronounced than Basic Training. Everything must be just so: Your rack (bunk or bed) must be made to certain dimensions, boots shined (when they used black “jungle boots”) to a specific sheen, your face shaved a specific way, every ribbon, medal, chevron, lace, thread placed exactly so, every rifle movement had to snap and pop in perfect unison.

In many ways, Sikhi culture–especially the youth–face the same problem. An older generation may tell them how important it is to wear the Five K’s (comb, unshorn hair, the blade, special shorts, and the steel bracelet), but the youth are left wondering why. The problem is especially profound here in America, where the younger generation is raised as a cultural minority. They may ask themselves:

Why don’t other people observe these practices?
All my friends are talking about shaving now. Why can’t I?
Will everyone make fun of me because of my hair/turban?
I’m the only Sikh in my school. I just want to fit in and stop being looked at differently…

Regardless of the importance in wearing the Five K’s, I think these are worthy and legitimate concerns that every Sikhi family should address with their children. Growing up is about discovering who you are in the world, what your role is, and staking out that existence. If you as a parent or influential adult simply say “We wear the Five K’s because Guru Gobind Singh told us to,” then you’ll lose your kids. No one likes that answer. We didn’t like it in Boot Camp and kids today certainly won’t either.

On the other hand, there are plenty of websites and articles talking about the so-called mystic and scientific reasons behind why growing out your hair is important. Here’s one about how the hair actually serves as a neuro antenna. I’ve read several heart-felt letters from a man to his son about why wearing the Kesh (unshorn hair) and turban are so critical. Judging by the growing number of campaigns fighting to keep this tradition alive, the problem must be serious.

So my question for the Sikhi youth (and even adults) is, why not? Why be ashamed of the Kesh or the turban? If youthful vibrance is about being bold, standing out, declaring your identity, why not embrace an aspect of your culture–your religion–that historically makes you so? Guru Gobind Singh once said that he established the uniform of the Khalsa that you might “Stand out as one among millions.”

And why should you stand out? What’s the big deal about being a Sikh? A Sikh stands up. Remember how Guru Nanak spoke out boldly against the religious persecution of the Mughal invaders and demanded human equality? Or how about how Guru Amar Das, in observing strict equality, said that even the Emperor of India had to first sit among and eat with the lowest of society before meeting the Guru? Oh, and then there’s Guru Tegh Bahadur who laid down his life in order to protect the religious freedom of a religion other than his own?

And what about every Sikhi martyr–men and women–who have fought (both in legal matters and on the battlefield) for the identity you struggle with today?

When you take the Amrit baptism, you aren’t simply initiated into a faith, it’s a pledge of allegiance to an ideal and a culture. The Five K’s are your uniform. 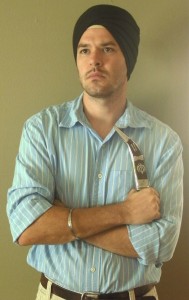 Every one of the Five K’s has meaning, and I go over those meanings in this post. I admit, when I first starting wearing the Five K’s, when my beard started growing out, when I grumbled in frustration over tying the turban, I thought the very same thing that these youth do. Must I really wear this to be a good Sikh?

You can’t be a Marine without the uniform and everything on that uniform has a purpose. Sikhs say the following Chandi Charitra prayer as they take the Amrit baptism:

“Grant me this strength, O God:
That I may never deter from righteous deeds.
I may fear none, when I go fighting the evil,
And with confidence in You, come out victorious.
Your Glory may be ingrained in my mind,
And singing Your praises be my highest ambition.
When this mortal frame reaches its end,
I may die fighting with limitless courage,
For the establishment of righteousness.”

Now, I understand why I wear these items. I understand who I am as an honorary Sikh and who/what I stand for. A Sikh defends the weak, fights for the oppressed, and stands as a beacon of stability, valor, and honor. When there’s a Sikh wearing the Five K’s in the room, you know he/she has you covered. By the same token, the uniform of the Khalsa (a baptized Sikh) isn’t to be worn lightly. This isn’t something do just because your parents did. Each baptism is a unique declaration of faith and fidelity to God and mankind to uphold honorable values. You may be a part of the Panth (world community of Khalsa), but you are an individual sentry on the watch against tyranny.

If you are a Sikh youth and wavering on this issue, I humbly suggest you really explore your reasons for not wearing the Five K’s. Go to your parents, find older Sikhs who’ve gone through the same issue, read the example of other Sikhs, and go to Waheguru–that wonderful light which dispels all darkness–for guidance. You don’t have to wear the Five K’s to be a good person, but if you want to be part of the “Army of the Lord,” you have to wear the uniform