I was saying the isha prayer (the night prayer) two nights ago when I suddenly felt compelled to stop. My forehead and tip of my nose on the red leaf pattern of my prayer rug during prostrations, I slowly leaned back and settled on my knees. I was at the end of my second rakah (prayer unit). Like a painter near the conclusion of his own work, I felt as if anything more would over-do the piece. So I sat there watching, waiting, listening, for nothing in particular…until I looked down at my red and cream prayer rug.

My knees hurt after a while so I crossed my legs and lit the candle on my altar-shelf. I stared at my prayer rug and ran the tips of my fingers through the soft tassels at the front of the rug. The room darkened as my peripheral vision gradually collapsed. My fingertips roamed away from the tassels and traced the sickle and flame-like patterns imprinted on the rug. Every dimension seemed perfectly aligned, perfectly matched, until I looked closer. I noticed that the color scheme between the patterns were off compared to the opposing side; there was a slight pull in the thread here, an errant stitch there. Then I remembered an old Persian proverb from many years ago…

“A Persian rug is perfectly imperfect, and precisely imprecise.”

Traditional, hand-made Persian rugs have intentional flaws because the Muslim artists feel that only Allah is perfect and has the right to create perfectly. There is a certain ironic arrogance here in that the artist assumes that the intentional imperfect stitch is what makes the rug imperfect. I suppose it’s the thought that counts, but as I sat there thinking about the imperfection of my cheap prayer rug from Turkey, I thought about Allah and His creation.

Did He, like the Persian rug makers, create reality with an imperfect stitch? And if so, where?

Of course most of us would say we are flawed, but how do we know we are? What is the yardstick of perfection we compare ourselves to in order to make such a judgement?

In the story of creation, we have our theological answer from two aligned sources:

“So God created mankind in his own image, in the image of God he created them; male and female he created.” –Genesis 1:27

“When I (Allah) have fashioned him and breathed into him (the first man) of My spirit, fall ye down in obeisance unto him.”–Qur’an 15: 29

In both accounts God is both our model and maker. He is the master mold of our being as well as the artist who fashioned us.

So I only have one question: Did God include an imperfect stitch? If so, what is it?

Of course we are flawed, otherwise it would make no sense for us to worship God. Even if God somehow replicated himself, that “copy” would remain slightly inferior to the “original.”

My vote is that our imperfect stitch is, ironically, also what makes us like God himself. Humanity is often considered God’s master stroke in creation because of our consciousness–our awareness, ability to choose, and to create. This makes us almost wholly unique in the natural world. It’s also what gets us into trouble.

Here is the difference between God’s consciousness, ability to choose, and to create and our own capacity to do the same:

Now things are clear. I can see our “imperfect stitch.” Our flaw is that we take our God-like qualities and turn them in on themselves. We do the exact opposite that God does in the three points mentioned above. On the other hand if we did not have these flaws, we would be gods ourselves, and I don’t think Allah set out to make copies of himself. Therefore, an imperfect stitch is what makes us uniquely human and on a deeper level, uniquely individual. Imperfection means dynamism, the ability to create variation in the whole. Because of our imperfections, there will never be a humanity like us, and there will never be a person like you.

I believe that if God made us, as the great rug-maker, that each of us have a unique imperfect stitch. This makes us who we are and what we can be. Without this inherent, perfectly placed flaw, we’d be perfect…and who wants all that noise?

What’s the imperfect stitch that makes you who you are? 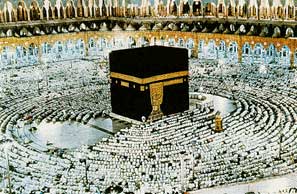 The Hajj: A Journey of a Lifetime
archives most recent
More from Beliefnet and our partners
previous posts