I have a near debilitating fear of needles. They are sharp, painful, and I still don’t understand why impaling myself is the best way to receive medication. The reality is that, in some cases, what’s good for us does not always come in a pretty package.

September 11th, 2001 was one of the ugliest packages in History.

Before September 11th, I didn’t know a thing about Islam. I’d never seen a Muslim in person, and probably wouldn’t know one if you had pointed them out. After that day however, I knew enough to join the Marine Corps. and want to kill them. Many in that time of national stress and pain shared my feelings, but not everyone.

Prior to these attacks, there were an estimated 1.2 million Muslims in the United States, with a rate of about 25,000 conversions a year. Afterward…

“Non-Muslim Americans are now interested in getting to know Islam. There are a number of signs… Libraries have run out of books on Islam… English translations of the Koran head the American best-seller list… The Americans are showing increasing willingness to convert to Islam since September 11… Thousands of non-Muslim Americans have responded to invitations to visit mosques, resembling the waves of the sea crashing on the shore one after another…”

Ala Bayumi, the Director of Arab affairs at the Council for American Islamic Relations, said that in the London newspaper, Al-Hayat, in November of 2001.

So just that we are on the same page: A healthy portion of Americans actually looked into Islam after September 11th? Wouldn’t most Americans simply hate the faith? Well, many did, in fact there was a time where I think we were only a step or two away from the Japanese-American Internment Camps during World War II following the attacks on Pearl Harbor. 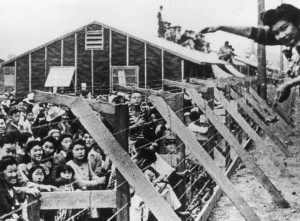 Although we curtailed this fate by remembering its cruelty and recognizing that our war was not against Islam, public awareness of Islam skyrocketed just as opinion for the religion plummeted. So why the increased conversions in the years to follow? If public opinion was so bad, why the interest?

Because by this time, Islam become a curiosity–something novel and foreign. The same thing happened during the Vietnam mess when G.I’s brought home heroine and South Asian culture (including wives). Remember the 70’s? Similarly in World War II, service men from conflict theaters in Japan, Italy, and Germany brought over the very culture we were fighting against in the war. Why? Because culture is no respecter of persons, it’ll stick to whoever is willing to carry it.

And war is a great way to share culture.

The same thing happened with Islam. An influx of Muslim Americans by numbers is a tricky business to handle. The statistics are all over the place depending on which poll you look at. Truth is, people are curious, and have been since the towers fell. 80% of Muslim converts in the U.S. come from a Christian background. In many cases, converts made their shahada (declaration of faith) because of the moral code within Islam. This does not suggest a lack of morality within Christianity or any other faith, but it is telling of a relative slack in the representation of those ideals. In many cases, U.S. Christians are so only by association, so when something like Islam comes along with its highly visible practices (hijab, 5 daily salat, etc.), the distinction is made.

Many opponents of Islam like to say that the religion was spread by the sword. This is wrong, but only on the surface. Islam cannot be spread by the sword because the Qur’an clearly states freedom of religion and non-compulsory tactics (Sura 6: 70, 2: 272). What many in the West don’t understand is that the wars of the early Caliphate were not a spread of Islam, but an Arabic invasion of the surrounding territory. Within one hundred years, the Caliphate spanned from Iberia on the Atlantic coast, to the borders of India. And what did the Arab armies marching through these lands have to share? Islam. Sure, there are those who were coerced into the faith, however many cultures actually viewed the armies as liberators, which lends credit as to why the territory spread so quickly.

As you can see, while war and violence is painful (like the needle), it often opens borders and people in ways we might not otherwise achieve. I by no means condone fighting, but facts are facts. In so many cases in history, we fight the enemy “over there” and import their very culture and ideals to our own shores. In this way, the September 11th attacks represent a bittersweet scenario of Islam in America. On one hand, many resident Muslims suffered persecution by their fellow Americans for atrocities they themselves had nothing to do with. On the other, the spike in converts to Islam are the highest the country has ever seen, and because of mass media and the internet, global awareness of Islam after September 11th was probably the highest since those Arabic armies marched across the known world.

Does the end justify the means, religiously speaking? Was the attacks on the U.S. the painful “shot” that paved the way for Islam? Remember, as painful as wars like WWII and Vietnam were, the culture they imported molded and shaped the very society we enjoy today. What would Islam mean to the West if not for those 19 so-called “Muslims” who hijacked those planes that day? I’ve often thought of God making lemonade of the lemons life hands us. Perhaps September 11th was one of those examples… 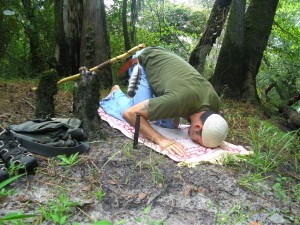