Partisans and Prayer: Right and Left together, for once

This graphic from Kevin Drum at Mother Jones (via Secular Right and dotCommonweal) is interesting: The more politically committed people are, the greater the frequency of prayer. One thing it may say is that the idea that conservatives are more “religious” is a canard. Moderation may be no virtue, perhaps. The greater mystery may be that expressed so poignantly by Lincoln in his Second Inaugural:

“Both read the same Bible and pray to the same God, and each invokes His aid against the other. It may seem strange that any men should dare to ask a just God’s assistance in wringing their bread from the sweat of other men’s faces, but let us judge not, that we be not judged. The prayers of both could not be answered. That of neither has been answered fully. The Almighty has His own purposes.” 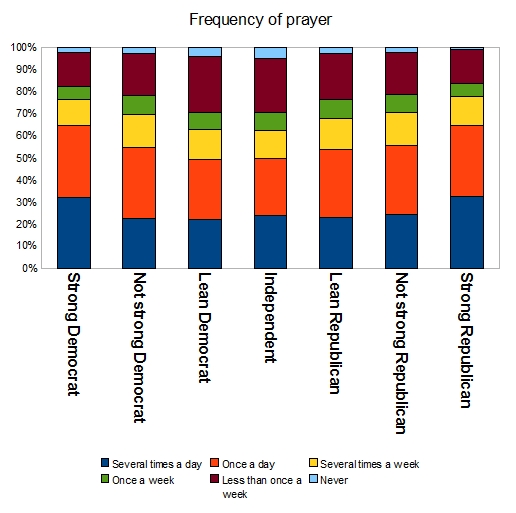