I just had the huge pleasure of spending three days with His Holiness the Dalai Lama at the Aspen Institute in Aspen, Colorado, with old friends and luminaries in the Tibet world. A sand mandala (sacred celestial mansion diagram) of Avalokiteshvara, the bodhisattva of universal compassion, was created and dissolved. Juniper incense offerings were made, Tibetan music was played, and lively discussions were conducted both about the current 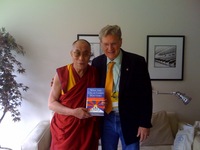 crisis in Tibet and about the long-term prospects for the survival of Tibetan culture and identity.

His Holiness was his usual jolly and insightful self, though at moments one could sense the deep stress he feels due to the covert “cultural revolution” still being waged by the Chinese government against the Tibetan identity, which is so deeply rooted in Tibetan Buddhist culture. Tibetans are still being beaten, arrested, tortured, and killed for having voiced their wish for freedom and unimpeded spiritual reunion with their Lama teachers.

In the midst of it all last Friday, Senator and candidate John McCain met with the Dalai Lama and expressed his sympathy for the Tibetan people and solidarity with the nonviolent and moderate offer the Dalai Lama continues to make to the Chinese government. Later in the day, a letter came from Senator Barack Obama, expressing regret that his travel schedule prevented him from meeting and honoring His Holiness and pledging his support for the Tibetan cause in terms of regaining their human rights and religious freedom.

These good will gestures are heartening to all who desire peace and justice for Tibetans. Why did both candidates want to meet with the Dalai Lama? I find myself wishing that the candidates would read my new book, Why the Dalai Lama Matters, so that they can better understand the incredibly high stakes in this Tibetan liberation struggle.  The China-West (especially US, EU, Russia, India, and Japan) relationship is the most important relationship for the entire 21rst century. China is one of the most ascendant nations of the coming era. We must all welcome its rightful importance. But the world will never tolerate another conquering superpower. The European and Japanese empires have declined. The Russian and American “superpower” hegemonies are demonstrating their un-viability. The UN is still crippled by the five WW II victors’ wielding their vetoes. So China, India, Brazil, the Muslim world, and the main African powers will inevitably emerge. For global survival, they must not repeat the mistakes of previous empires and superpowers, but  turn to a new concept of power, the power of interconnectedness, peacefulness, dialogue, a global meshing of mutual enlightened self-interests.