There was a time, many years ago now, when I used to watch Pat Robertson’s “700 Club” and think it was a pretty good program. It had inspiring stories of faith, outreach and emergency aid programs. It was an example of Christian activism in the community.

It till offers those things, but at some point, Robertson and, unavoidably, his Christian Broadcasting Network, lost their way in a broader, more headline-grabbing sense. The 700 Club (its name originally a reference to 700 partners who committed to contributing $10 a month to support the program ) has become a forum for more and more donation pitches — and a platform for a right wing political movement couched in religiosity.

Robertson’s increasingly ill-conceived commentary, wherein he seemingly dons the cloak of prophet (especially in the years since his failed presidential bid), have gotten more bizarre with each utterance.

As 2007 dawned, Robertson claimed God told him terrorists would attack before the end of that year and “chaos is going to rule.” Oh, and millions of people “might” die. (At least, Pat hedged the body count; the ol’ crystal ball must’ve lost its heavenly Wi-Fi connection at some point).

This is the same self-proclaimed man of God who blurted out that both the 2010 Haitian earthquake, which killed tens if not hundreds of thousands of people, and the destruction of much of New Orleans in 2005 by Hurricane Katrina (about 2,000 dead, hundreds of thousands homeless) were God’s punishment.

Robertson blamed Haitian woes on a 200-year-old folk tale, which he claimed was true, about some voodoo priests enlisting dark forces to oust French colonists from rule. And Katrina? That was punishment for the nation’s sins, especially abortion. (I, too, abhor abortion, but I have to ask, Pat, what did the poor, mostly black residents of the Lower Ninth Ward do to deserve Katrina’s wrath, let alone that of God?)

Robertson’s wacky words of wisdom have also included blaming Israeli leader Ariel Sharon’s debilitating 2006 stroke on God’s displeasure with his Palestinian peace initiatives; a call for assassination of Venezuelan President Hugo Chavez; and, by the way, Islam is not a religion, according to Pat.

But it is Robertson’s latest gaffe that has me thinking the 700 Club might be better served by changing its name to “$#*! Pat Robertson Says” (apologies to “$#*! My Dad Says,” which at least has the redeeming quality of being often funny, and occasionally insightful, if crude and laced with salty language).

Earlier this week, Robertson opined that divorcing a spouse with Alzheimer’s disease was OK, equating the memory-robbing ailment to “a kind of death. He softened that a bit, saying Alzheimer’s afflicted spouses should be cared for, at least, before being shuffled out of matrimony.

Most Christians, Pat, make a marriage vow before God that goes something like this:

“. . . to have and to hold, from this day forward, for better, for worse, for richer, for poorer, in sickness and in health, until death do us part.”

Not a kind of death. Death, as in breathing and heart stopped, brain functions gone, spirit departed, time-to-grieve-and-make-funeral-plans Death.

Like what seems to have happened to that last shred of validity for anything the Rev. Pat Robertson has to say.

(***FYI, on Monday, Sept. 26th’s edition of the “700 Club,” Rev. Robertson “clarified” his comment. Well, he reversed it, let’s be honest:  “Please know that I believe the Bible. Please know that I never would tell anybody to leave their sick spouse. I never, never would say such a thing because I need my spouse when I get sick and she needs me when she gets sick.” He said, “In sickness and in health, I believe it. So phew! “) 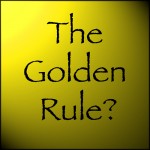 The Golden Rule: Common ground for a multi-faith, multi-cultural nation
archives most recent
More from Beliefnet and our partners
previous posts