An Experience to Eclipse All Others

The heavens declare the glory of God; the skies proclaim the work of his hands.      (Psalm 19:1) 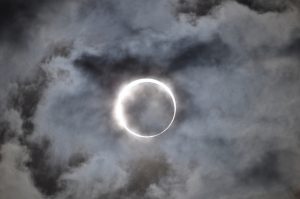 Witnessing a total eclipse of the sun is a once in a lifetime experience, but once you’ve observed it, you’ll hope to make it happen again, so well worth the effort it is. We traveled to Rexburg, Idaho where we enjoyed 2 minutes and 16 seconds of pure day-dark wonder!

Our only regret was that we hadn’t studied up on the eclipse, other than to listen to a podcast about it on our drive, during which I fell soundly asleep. As I listened to a small portion, Hugh Ross discussed the phenomenon, and I was struck with how much I wished we could view the eclipse with an astrophysicist like himself.

God gives us the desires of our hearts.

As we wandered into the town of Rexburg, we looked for a spot to view the eclipse that wasn’t too congested. We parked the car and wandered into a drive-in movie theater where we were immediately greeted by another visitor, an astrophysicist, nonetheless, with three telescopes and two binoculars ready to go; he was more than willing to share them with us, and he walked and talked us through the whole amazing experience from beginning to end. We had our wish – an astrophysicist, Professor Woolley by name, and his lovely wife Linda.

He pointed out many things we otherwise would have missed. For example, as the sun became more and more eclipsed, our shadows sharpened, like they were perfectly cut out of big pieces of black paper.

He showed us the prominences of the sun dance around the periphery, each of which is larger than the planet we are standing on.

What a glorious moment when we could take off our protective glasses and feast our eyes on the full phenomenon. It was as dark as night for over two minutes. We saw Venus and stars shining down on us.

One of the most amazing observations was that even when much or almost all of the sun was eclipsed by our moon – before and after the total eclipse – the light was still so bright around us. I find that encouraging: No matter how much darkness threatens to snuff out the light in our lives, the light still shines brighter, refusing to be extinguished!

Be exalted, O God, above the heavens; let your glory be over all the earth. (Psalm 57:5)

Father,
We give You thanks and praise for the wonder of Your creation and that You have given it to us to enjoy and tend. May we hold it dear and love it well.
Amen