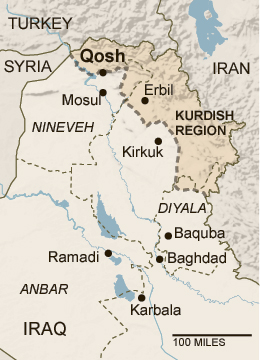 Iraqi Christians from the south of the country are fleeing to havens in the north and those with means are leaving Iraq all together. The renewed campaign of violence against Christians is exacerbated by a growing fear that Iraqi security forces are unable – even unwilling – to protect them.

The flight including thousands of Christian residents from Baghdad and Mosul, followed an October 31st siege of a church in Baghdad that  killed 51 worshipers and 2 priests. Subsequent bombings and assassinations singling out Christians. This new exodus highlights the continuing displacement of Iraqi Christians despite improved security in the nation as a whole.

“God, we pray for the Christians in Iraq. We pray for their safety. We pray for protection. Send your angels to guard their lives and their hearts. Give them courage and hope.  God, we pray that the leaders of Iraq would have courage to resist the forces that would persecute your people. Bring a spirit of peace on this war-weary nation and her people. We pray that this season would see a new discovery of true peace, and that the Prince of Peace would reign, even there…”