Awe… at the Guatemala Sink Hole

“Therefore we will not fear, though the earth give way and the mountains fall into the heart of the sea.” Psalm 46:2. 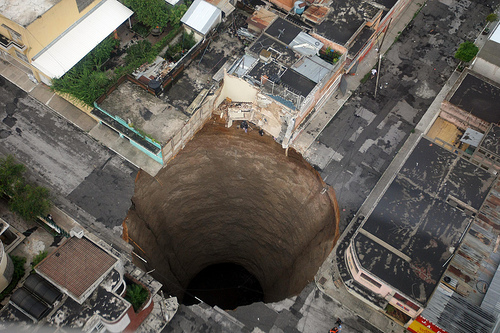 This huge crater in Guatemala City formed after flood waters of tropical storm Agatha eroded soil hundreds of feet underground. The cavern swallowed a three story building which has disappeared without a trace into the bowels of the earth.

The death toll from Tropical Storm Agatha is growing, with 123 reported killed in Guatemala, 17 in Honduras and nine in El Salvador. Another 90 people are missing in Guatemala and another 69 have been injured.

Let’s pray for Guatemala as it deals with Agatha and also the effects of the Pacaya volcano, which erupted Thursday night.