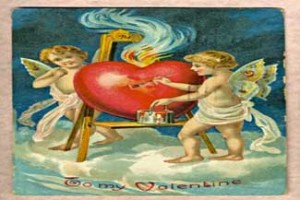 Once the super-bowl is over, advertisers turn from beer and cars to chocolate and hearts. It’s a break from the dreariness of winter, to think of love.

You look for love, show your love, and appreciate love on Valentine’s Day. Even though the origin of the holiday came from the Christian martyr Saint Valentine, it’s an ageless and universal tradition to celebrate love.

Some people say Valentine’s Day is over-rated. Lot’s of silly people running to Walgreen’s to buy over-priced greeting cards, flowers and candy. But there are plenty of Valentine’s Day fans, women and girls mostly, who adore the holiday and pin their hopes on a romantic February 14th.

Cupid shows up this time of year with all of his lovemaking regalia. He has a bow and arrow; he’s in flight, and hovering all over the place like a celestial match.com. Legend has it, if you’re looking for love, now’s the time to find it.

One recent Valentine’s Day that fell on a Sunday, Carlie was in church thinking about Red Lobster and reading a passage in her bible about angels. Red Lobster is where she and her husband were going that night for their romantic dinner. The scripture she was studying was about the angels Abraham hosted, when he and Sarah were having marital woes. It occurred to her that maybe it wasn’t coincidence that Cupid and Angels have a lot in common.

Heaven, wings, and lack of appropriate clothing are just a few of the things you think about when comparing Cupid to an angel. In fact, by definition, being a messenger from God is commonly referred to for both of the chubby little fairy-like creatures.

Carlie realized God is closer to the modern day holiday than she thought. By setting aside a day each year to honor love, she’s singling out one more way to honor God. There cannot be a greater gift than God’s love. Spread it around today with extra exuberance. The meaning of Valentine’s Day is not lost by enjoying it.