We’re sure that no one, especially Adam Sandler himself expected the Hannukah Song to be the mega hit that doesn’t quit. The reason for its success could be the fact that Hannukah songs are poorly represented. “I Have a Little Dreidel” is no match for Sandlers tune. It also could be that The Hannukah Song is one of the best holiday songs ever, simply because it’s hilarious. Laugh out loud at today’s Prayable pick for holiday humor that zings while it sings.

Intro: this is a song, that uh, there’s a lot of Xmas songs out there, but not
Too many about Hanukkah, so I wrote a song for all those nice little Jewish
Kids who don’t get to hear any Hanukkah songs–here we go…

Put on your yalmulka, here comes hanukkah
Its so much fun-akkah to celebrate hanukkah,

Hanukkah is the festival of lights,
Instead of one day of presents, we have eight crazy nights.

When you feel like the only kid in town without a x-mas tree, heres a list of
People who are Jewish, just like you and me:

Paul Newman’s half Jewish; Goldie Hawn’s half too,
Put them together–what a fine lookin’ Jew!
You don’t need deck the halls or jingle bell rock
Cause you can spin the dreidl with captain kirk and mr. spock–both jewish!

Put on your yalmulka, it’s time for Hanukkah,
The owner of the Seattle super sonic-ahs celebrates Hanukkah.

O.J. Simpson– not a Jew!
But guess who is…hall of famer Rod Carew–(he converted!)

We got Ann Landers and her sister Dear Abby,
Harrison Fords a quarter Jewish–not too shabby!

Some people think that Ebeneezer Scrooge is,
Well, he’s not, but guess who is: all Three Stooges.

So many Jews are in show biz–
Tom Cruise isn’t, but I heard his agent is.

Tell your friend Veronica, it’s time you celebrate Hanukkah
I hope I get a harmonica, on this lovely, lovely Hanukkah. 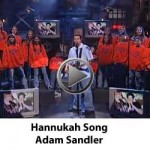