My son and I went to see the band Avenged Sevenfold last Friday in Irvine, which was an Orange County homecoming for the band (they are from here in Huntington Beach where we live).

The band’s drummer, Jimmy “The Rev” Sullivan died last December, and since then I have written several newspaper columns on Sullivan, the band, and especially the fans, who share a special bond with this band–a deeply emotional connection to the music, the lyrics and the members themselves.
Interestingly, after Sullivan’s death, legendary drummer Mike Portnoy was asked to sit in on the new album and then ultimately, the tour the band is in the midst of now.
Portnoy, leader of the famed prog-metal outfit Dream Theater was Sullivan’s favorite drummer growing up, so the news of Portnoy’s involvement was significant (Portnoy also made big news recently after announcing that he was leaving Dream Theater to pursue new creative avenues).
My family and the Sullivans are good friends, and we met them after the show Friday night. This was the first time they’d seen Avenged Sevenfold, and so they were understandably emotional. Joe, Barbara and their two grown daughters told us they’d enjoyed the power of the show but that obviously, it was strange (and sad) to not see Jimmy behind the drum kit.
Mike Portnoy, who I’ve interviewed before, was kind enough to arrange for my son and I to go backstage after the show to see him.
The Sullivans had yet to meet their son’s idol who was now sitting in for him, and they were anxious to.
So now we had a mission and off we went.
Backstage was an outdoor area set well behind the stage where the band Disturbed was off in the distance, closing the show. It was dark, crowded, and congested with band busses, gear cases, a couple of limos, and the usual chaos one encounters backstage at shows of this magnitude.
I left the Sullivans to find Portnoy, which took me just a few moments. I told Mike that I had the Sullivans and to stay put while I went back and found them in the mob.
A minute or two later, the introductions were made.
Mike and Joe Sullivan embraced. Then Mike hugged Barbara, and Jimmy’s two sisters. There were tears. And stories. And lots of emotion. Mike told the family how much he feels Jimmy’s legacy in the air each night they play. And what it means to him to be playing drums in the band. Joe expressed to Mike how much “little” Jimmy adored Portnoy growing up. Some pictures were taken. More hugs. More tears. More sharing of stories.
It’s easy to imagine that somewhere in that cool, star-filled night sky, someone was watching – a former rambunctious little kid who used to play pots and pans in the bathtub – then grew up to become what band called (back at the funeral and again onstage Friday) “everybody’s best friend” – and one hell of a drummer.
You could feel it.
This was a very special moment in the middle of all the craziness, and a privilege to witness.
It was a drummer honoring a family honoring a drummer–a cycle of love and appreciation – a moment in which two parents and two sisters were able to embrace the man that will now be linked with their son, in spirit and in music – foREVer. 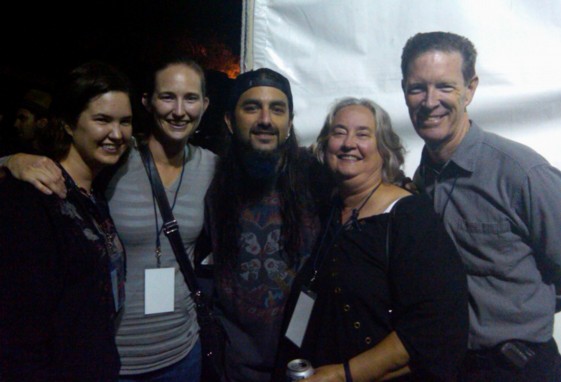 read next post
Off to Antarctica...
archives most recent
More from Beliefnet and our partners
previous posts

Thank you for visiting Pop Culture Road Trip. This blog is no longer being updated. Please enjoy the archives. Here is another blog you may also enjoy: Idol Chatter Happy Reading!!!

Let the music move you...

I wanted to let you know that I’ve started a new blog here at beliefnet.net – The Rock and Roll Road Trip – which is where you can now follow me. Thanks for continuing the ride….

Back from the Arctic...

Charlie and I made it back from the Actic and it was more spectacular than we imagined it would be. I’ve already written an article about it…   “Maybe it was the deep isolation in a blue and white ice world; maybe it was the spectacular nature or a combination of both. Whatever it was, […]

Something special – recently I sat down at the home of Phil Collen from Def Leppard – he shared some of the new live album that’s coming out this week, “Mirrorball” – which includes three new studio tracks as well. More to follow once the album is released, but here’s a glimpse of our visit… […]