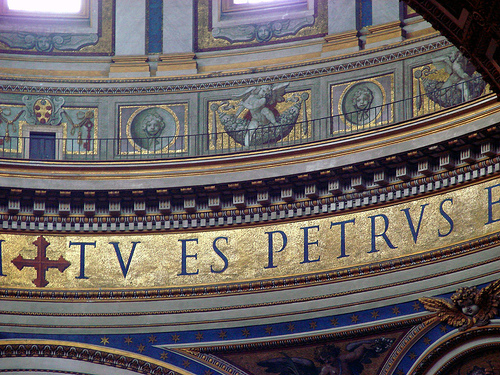 Rome should switch from Latin to English, Thomas G. Casey, SJ, argues in this America essay, “Ave atque Vale.” Casey, an Irish Jesuit and professor of philosophy at the Gregorian University in Rome, notes that Italian is understandably the Vatican argot, but Latin is its official language–despite the fact that fewer and fewer church officials can speak or read or write it.

(Benedict XVI being a major exception; he is said to be one of the dozen top Latinists in the world, as opposed to John Paul II, who the irrepressible and inimitable papal Latinist, Fr. Reggie Foster, charged with speaking “spaghetti Latin”!)

Arguing from history, Casey notes that “In the fourth and fifth centuries Latin replaced Greek as the language of the Mass. This shift was a brave response to the changing times. First, the church had come to recognize that the center of Christianity was in Rome. Latin was the language of that city and the language of the world’s major power at the time, the Roman Empire. Second, the church recognized that Latin was the lingua franca throughout western Europe, and it wanted to reach all the people there.” Latin, he says, “provided the Catholic Church with a stable norm by which to evaluate the correctness of doctrinal and theological expressions in other languages.”

Now, he says, the time has come to switch to English:

In the medieval world, Latin enabled the church to shape the contemporary intellectual culture in a decisive way. Could English provide a similar resource for today’s church? It may be time for the church to make a brave linguistic leap of faith. As Virgil once wrote, Audentes fortuna iuvat: “Fortune favors the bold.”

Iran: Revolution on?
archives most recent
More from Beliefnet and our partners
previous posts