Octo-mel: Gibson yuks it up over infidelity 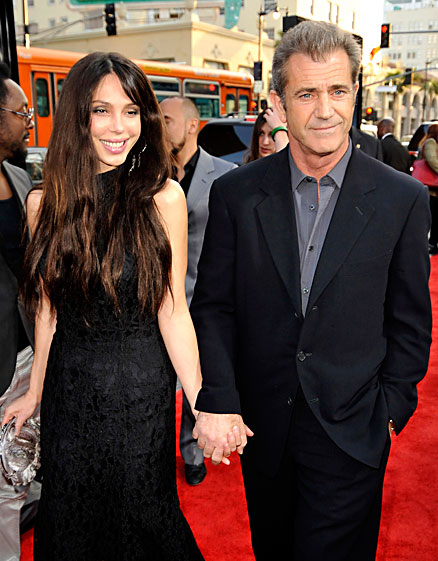 Okay, it’s one thing for uber-Traditionalist Catholic Mel to dispense with his marriage of 28 years and 7 children in private court proceedings. But what’s up with the talk-show parade to promote his latest squeeze, Russian musician Oksana Grigorieva, who is pregnant with what will be Gibson’s eighth child.

After the requisite breast-beating (one joke Mel didn’t make)–“Look, these things happen. It’s unfortunate,” as the PEOPLE mag relates it–Gibson and Leno go all frat boy, as The Daily Beast’s Kim Masters has it:

Gibson apologized for his diatribe against the Jews, but with women he’s digging himself in deeper every day. He told Jimmy Kimmel that he never used the phrase “sugar tits” but wished he had. Then on Monday he had an exchange with Leno that sounded like it was from five decades ago. First Gibson explained that he was drawn to Grigorieva before he ever saw her, when he heard her sing.

“So you were attracted to her voice,” Leno deadpanned. “Did you hear Susan Boyle?”

Gibson laughed and then replied, “I could put the squeeze on Susan Boyle.” (Who would doubt it?)

“And I assume she has a nice Rach-maninoff?” Leno leered.

This followed an exchange in which 53-year-old Gibson revealed his girlfriend’s age. “She’s going to kill me for this–she’s almost 40,” he said. “Now I’m going to have two women mad at me.” Ah, yes–your 39-year-old friend and the wife of 28 years who bore you seven children.

But are women paying attention? That depends on whom you ask. A veteran marketer says Gibson’s female fan base is and they won’t like this recent turn in his life. “A great percentage of the audience is female,” she says. “It wasn’t guys who were paying for What Women Want or even Ransom.” She believes the same will apply to Edge of Darkness, [Gibson’s first starring vehicle since 2002, to be released next year] which involves a father who investigates the murder of his activist daughter. “Avenging the death of a child skews female,” she says.

Another problem is that Gibson’s behavior is perilously at odds with his image, she continues. “Mel didn’t build his career on being a bad boy,” she says. “We’re not talking about Kiefer Sutherland here.”

So will this hurt Mel? Will it hurt the image of the faith? Sonia Sotomayor is already getting flack for being some species of “lapsed Catholic.” And what is Mel Gibson? It shouldn’t matter, except that Gibson has set himself up as a paradigm of orthodoxy.