Jesus in a Cheeto: Miracle or substantiation “con”? 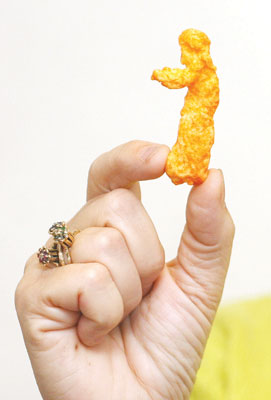 Yes, another “Cheesus,” and again in Texas. We had one here last July, though it was Christ on the Cross–more than blasphemous enough for me. (And what it means for Protestant theology on the Eucharist, God knows.) This week’s version is a more pastoral Lord, or prayerful. The Preston Hollow paper reports:

Bell came across the strange snack a few weeks ago while she and her husband, Dan, were driving home from Houston. He bought her a bag of Cheetos in Jersey Village, she said, and everything was normal until she was about a third of the way through it.

“Then Jesus appeared,” Bell said with a laugh.

Until she decides what to do with the Cheeto, Bell is keeping it safe, wrapped in tissue inside a box that once held a wristwatch.

“What I’ve been worried about is if I have it around my house, it’ll get eaten,” the retired teacher said. “If not by a person, then by an ant.” …

“God is probably wherever you want to find God,” said the Rev. Diana Holbert, pastor of Grace United Methodist Church in Old East Dallas. “It seems like a little bit of a waste of time, but who am I to judge?”

Some friends have told Bell to put her Cheeto on eBay. Others told her to try to get it on Ellen DeGeneres’ talk show. But Matthews offered no such advice.
“I just told her I’m glad she’s found Jesus,” she said.

Yuk yuk. Right. Look, these things are such a staple of the culture it’s easy, and advisable, to dismiss them, or pass them around as funny emails. Last November it was Christ in a French toast. And earlier this month a coffee stain BVM (Blessed Virgin Mary for you newbies here) got the Onion treatment from Jonathan Tilove, who was understandably looking for divine help after rough going in the media industry.
But is there something more “substantial” at work? In a “Sightings” essay a while back, religion scholar Jeremy Biles made some connections of his own:

“Why are we fascinated with coincidences and unexpected resemblances? Why are they so often at the root of our narratives? Because chance resemblances and fortuitous convergences solicit interpretation. That is, they call out to be treated not merely as random occurrences, but rather as symbols — and symbols, philosopher of religion Paul Ricoeur writes, “give rise to thought.” But what precisely is religious about this fascination?

“Some believe that seeing the Holy Mother in a stain on the wall is an instance of wish fulfillment; it confirms faith. But I think that another level of wish fulfillment is at work. Humans partake of a desire for what astonishes — the irruption of the heterogeneous into the monotonous, the transformation of the everyday into the extraordinary. Coincidences, resemblances, and repetitions respond to a wish for the paranormal, the supernatural. And this desire compels a religio-aesthetic interpretation of life that engages the imagination and invigorates the soul.

“So when Jesus appears on tortilla, it is not — or not only — the sacred figure that makes the artifact “religious,” for the religious visage is a second-order representation; it simply makes more literal the seemingly supernatural quality of the fortuitous likeness. It is the resemblance itself that is miraculous.

“Coincidences and chance resemblances inject our lives with something beyond quotidian reality, making of everyday existence a metaphysical expedition, an ongoing adventure of interpretive engagement. And whether they are, in fact, signs written by a divine author or random occurrences, coincidences and resemblances become kernels of stories that enhance the meaning of our lives. They give rise to thought, they exercise our symbolic faculties, they arouse and focus our attention — and attention, it has been said, is the natural prayer of the soul.”

Then again, it could just be all about our neurons: as this NYT–with a great image gallery–story reports, it’s all about the face-recognition “software” in our brains:

Dr. Tsao’s investigation yielded a surprising related finding: areas of the brain she had identified as face-specific occasionally lighted up in response to objects that bore only a passing resemblance to faces.

“Nonface objects may have certain features that are weakly triggering these face cells,” she said. “If you go above a certain threshold, the monkeys might think that they’re seeing a face.” In the same way, she said, objects like cinnamon buns, rocky outcroppings and cloud formations may set off face radar if they bear enough resemblance to actual faces. 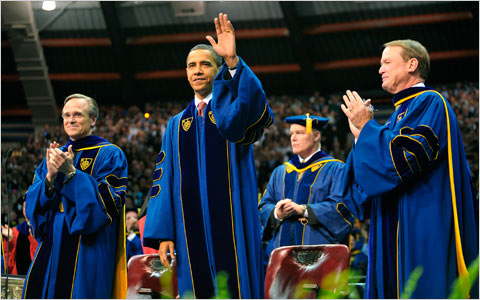