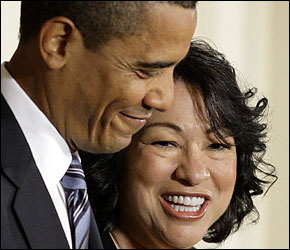 “Judge Sotomayor was raised as a Catholic and attends church for family celebrations and other important events.”

Sotomayor also served with Jesuit Father Joseph O’Hare, the retired president of Fordham University, on a New York City campaign finance review council, and O’Hare told CNS that when he knew her beginning in the late 1980s “she was indeed a practicing Catholic. He said he has no reason to think that has changed. They have stayed in touch intermittently, and he said she gave his name as a reference for her FBI background check.”

Whatever the case, that makes Catholics six for nine of the high court. The five current Catholic justices are already an all-time high. Anyone want to go for a sweep?

First question: Does it matter?

Second, the (awful) question will now be, what KIND of Catholic is she? She is divorced, without kids. Heck, she may want to downplay her practice of the faith as that will be a huge target–and it’s easy to guess who’ll be lobbing most of the heavy ordinance.

Sotomayor was born in the Bronx (cheers!) to parents from Puerto Rico, and she attended Catholic schools. From a May 14 New York Times profile:

Judge Sotomayor, 54, grew up in a Bronx housing project, a child of Puerto Rican parents. She would be the court’s first Hispanic justice.

Her father died when she was 9, leaving her mother to raise her and a brother. In speeches to Latino groups over the years, Judge Sotomayor has recalled how her mother worked six days a week as a nurse to send her and her brother to Catholic school, purchased the only set of encyclopedias in the neighborhood and kept a warm pot of rice and beans on the stove every day for their friends.

She loved Nancy Drew mysteries, she once said, and yearned to be a police detective. But a doctor who diagnosed her childhood diabetes suggested that would be difficult. She traded her adoration of Nancy for an allegiance to Perry — she became a fan of Perry Mason on television, she said, and decided to become a lawyer.

She went to Princeton, which she has described as a life-changing experience. When she arrived on campus from the Bronx, she said it was like “a visitor landing in an alien country.” She never raised her hand in her first year there. “I was too embarrassed and too intimidated to ask questions,” Judge Sotomayor said.

But as a federal appeals court judge, she has issued few rulings on issues like abortion. Steve also has several posts on her scant abortion-related rulings.

A Washington Post profile today says that because she never had children of her own she feels like her clerks are her kids.

Antonin Scalia, who is seen as a favorite of a certain segment of conservative Catholicism, has been forthright in stating that he would never make decisions on the basis of his faith. As he said in an address at Villanova Law School in October 2007, parsed by Robert Miller et al at First Things:

“There is no such thing as a ‘Catholic judge.’ The bottom line is that the Catholic faith seems to me to have little effect on my work as a judge…Just as there is no ‘Catholic’ way to cook a hamburger, I am hard pressed to tell you of a single opinion of mine that would have come out differently if I were not Catholic.”