A brief and to-the-point reflection that I think bears reading–a real signpost for the day, and the era:

Mr. President, Father President, Distinguished Faculty and Guests, Members of the Class of 2009, Families and Friends.

Graduates, you know today is a great day. It is a great day not only for you but for your parents and grandparents. They celebrate the completion of a passage – a passage you have made and they have made possible. The values they imparted to you have been tended here, intertwined with your increasingly independent lives as you face the urgent moral matters of the turbulent modern world.

For me, today brings me back to my own beginnings at Notre Dame. Recruited by Father Ted, I rejoiced in the ambience of Notre Dame – an ambience created by the love brought to it by faculty, staff, students, loyal alumni and the priests of Holy Cross. This love sustains a specially American institution situated as an integral part of an ancient, global institution, the Catholic Church. At the conclusion of the Second Vatican Council – Vatican II – we used to say of the next council, “On to Notre Dame I.” It’s still a valid hope.

I turn to issues before you as Americans prepared to participate in our urgent moral matters. Some things we have in common. Some things all of us know are wrong. Genocide is wrong.
Torture is wrong.
Slavery is wrong.

The hesitations, the doubts, the qualifications, the outright opposition of others delayed the day of victory for each of the great moral causes where the truth ultimately prevailed. The champions of the cause were frustrated – frustrated most of all by those who should have been their friends.

Consider, for example, the relations of two men rightly called giants, Abraham Lincoln and Frederick Douglass. As late as August 14, 1862, the President advised emancipated slaves to emigrate – to emigrate, as the President vaguely put it, to “somewhere in Central America.” The President’s advice, Douglass wrote, was “ridiculous.” The President’s comments confirmed Douglass’s conviction that the President did not get two facts fundamental to a just solution – first, that black Americans were Americans; second, that Americans did not want to live somewhere else. Little over one month later, enlightenment began to dawn. The President issued the Emancipation Proclamation.

For half a century now, a great debate has gone on in this country about a matter touching the inviolability of human life in a mother’s womb, the rights of a woman with respect to her own body, the duties of doctors, the obligations of parents, and the role of government in a decision that is patently personal and significantly social.

The matter of this debate was too serious to be settled by pollsters and pundits; too delicate to be decided by physical force or by banners and slogans, pickets and placards; too basic for settlement to be based on a vote by judges. The matter was settled – so it seemed – thirty-six years ago. The settlement was still-born. Debate intensified. Debate is not now about to close. At its center are the claims of conflicting consciences.

By conscience, as you graduates of 2009 know, we apprehend what God asks of us and what the love of our neighbor requires. More than the voice of your mother, more than an emotional impulse, this mysterious, impalpable, imprescriptible, indestructible, and indispensable guide governs our moral life. Each one is different. You may suggest what my conscience should say, but you cannot tell me what my conscience must say.

That’s the rub when your moral vision is clear and the other fellow’s is cloudy. You become impatient, the more frustrated if the other fellow is a friend – an old friend or a potential friend. Why can’t he or she see it? To satisfy that frustration by shunning or denouncing your unseeing companion will accomplish little beyond expressing your own exasperation.

Help your cause by hurting your friends? No. What does work is prayer, patience, empathy, and the love that encircles the other person, a fellow creature attempting to do what he or she sees as right.

One friend is not here today, whose absence I regret. By a lonely, courageous, and conscientious choice she declined the honor she deserved. I respect her decision. At the same time, I am here to confirm that all consciences are not the same; that we can recognize great goodness in our nation’s president without defending all of his multitudinous decisions; and that we can rejoice on this wholly happy occasion.

We can rejoice that we live in a country where dialogue, however difficult, is doable; where the resolution of our differences is done in peaceful ways; where our president is a man of conscience. We can rejoice with you, members of the Class of ’09, as your voices join the dialogue and declare your own notre_dame_commencement consciences on the urgent matters that will be settled only when they are settled right.

“Great is truth. It will prevail.” This scriptural text is inscribed on the Laetare Medal. Believing the Bible, sustained by this message taken from it, we can work together. Yes! We can work together, serenely secure in that trust that the truth will out. 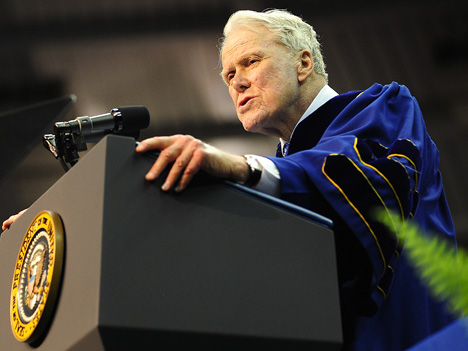 The other Notre Dame speaker: Judge Noonan
archives most recent
More from Beliefnet and our partners
previous posts