So the latest Obama-hates-God “story” making its way around the conservative blogosphere is that the president ordered religious symbols covered during his policy speech on the economy at Georgetown this week. The clear implication is that, obviously, Obama is an enemy of religion and specifically Christianity. (And why wouldn’t he, as he’s a Muslim?!)

A conservative outfit called CNSNews reported the story. Their stated goal is to “fairly present all legitimate sides of a story and debunk popular, albeit incorrect, myths about cultural and policy issues. 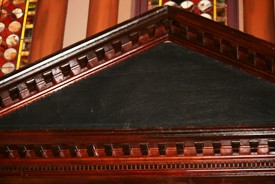 Yet, as a Georgetown spokesperson told the news service, the White House requested a neutral backdrop with Georgetown symbols covered, and the university went further and covered an “IHS” (the traditional monogram for the name of Jesus) and small cross in a pediment over the president’s head. A shot of the offending pediment, courtesy of CNSNews, is at right. A shot of the entire scene is at the end of this post. Go figure.

“The White House wanted a simple backdrop of flags and pipe and drape for the speech, consistent with what they’ve done for other policy speeches…Frankly, the pipe and drape wasn’t high enough by itself to fully cover the IHS and cross above the GU seal and it seemed most respectful to have them covered so as not to be seen out of context.”

That’s also the message Bataille sent to Julia Duin of the Washington Times, who contacted a spokesperson for Catholic University of America, who quickly distanced CUA from Georgetown:

Not every Catholic institution would have caved to quite this extent [Duin wrote]. Victor Nakas, spokesman for Catholic University, e-mailed me to say several presidents have visited CUA and the most recent administration official to speak there was then-Vice President Dick Cheney.

“I can’t imagine, as the bishops’ university and the national university of the Catholic Church, that we would ever cover up our religious art or signage for any reason,” Mr. Nakas wrote. “Our Catholic faith is integral to our identity as an institution of higher education.

Nice. CWNews is headlining the story, and Bill Donohue at the Catholic League titles his press release, OBAMA NIXES “JESUS” AT GEORGETOWN.

“The cowardice of Georgetown to stand fast on principle tells us more than we need to know about what is going on there, but the bigger story is the audacity of the Obama administration to ask a religious school to neuter itself before the president speaks there. No bishop who might speak at the White House would ever request that a crucifix be displayed behind him. Moreover, the same church and state fanatics who go nuts every time a polling place is set up in the basement of a Catholic school have been noticeably silent over this incident.”

Maybe that’s because, as David Brody of the Christian news service, CBNews.com reports, this is much ado about nothing:

Here is what The White House is telling The Brody File:

The President appreciated the gracious hosts at Georgetown University where he delivered his speech on the state of the economy. Decisions made about the backdrop for the speech were made to have a consistent background of American flags, which is standard for many presidential events. Any suggestions to the contrary are simply false.”

Georgetown University is saying that The White House made the request to cover all symbols around the stage but it’s important to point out at there are dozens of religious symbols in Gaston Hall and those were not covered up.

Also, other still pictures from the event show portraits of Jesus in the background which are off center from the stage. In addition, I can tell you that it has been my experience on the campaign trail that advance teams do typically make backdrops as generic as possible. It’s pretty much standard fare to make them that way.

Also, the fact that Georgetown University actually has a perfectly fit triangle piece to cover up the cross and monogram suggests that they have done this before at other events. We are waiting on Georgetown to provide us a response to that question.

Not everyone is so patient. No surprise. So check out the scene below. Offensive? 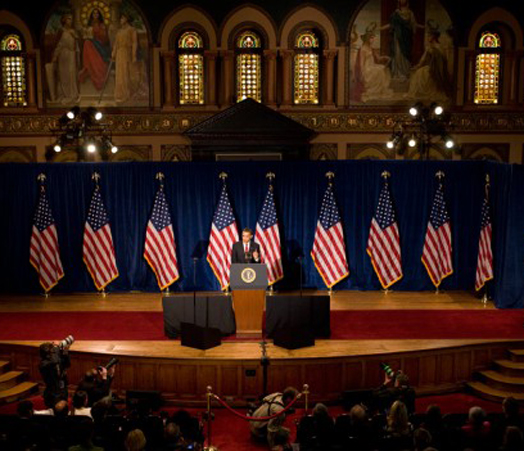