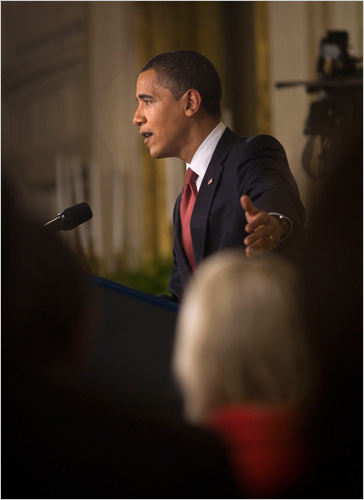 In his press conference last night President Obama took a question from The Washington Times’ John Ward about his controversial stem cell decision last month–an announcement that left me, and many others, rather cold.

Obama’s response was intriguing in that he grappled more humanly with the ethics of the issue, and seemed to speak in terms of using only embryos that are “leftover” from fertility treatments. The earlier announcement was, like his bank plan, mainly a statement of principles, with the devilish details left to the National Institutes of Health to work out. I wonder if the Administration is re-thinking what it wants those details to look like.

In any case, here is the relevant excerpt from the transcript:

JOHN WARD: In your remarks on stem cell research earlier this month, you talked about a majority consensus in determining whether or not this is the right thing to do, to federally fund embryonic stem cell research.

I’m just wondering, though, how much you personally wrestled with the morality or ethics of federally funding this kind of research, especially given the fact that science so far has shown a lot of progress with adult stem cells, but not a lot with embryonic?

OBAMA: OK. No, I think it’s–I think it’s a legitimate question. I, I wrestle with these issues every day.

As I mentioned to–I think in an interview a couple of days ago, by the time an issue reaches my desk, it’s a hard issue. If it was an easy issue, somebody else would have solved it and it wouldn’t have reached me.

I think that the guidelines that we provided meet that ethical test. What we have said is that, for embryos that are typically about to be discarded, for us to be able to use those in order to find cures for Parkinson’s or for Alzheimer’s or, you know, all sorts of other debilitating diseases, juvenile diabetes, that, that it is the right thing to do.

And that’s not just my opinion. That is the opinion of a number of people who are also against abortion.

Now, I am glad to see progress is being made in adult stem cells. And if the science determines that we can completely avoid a set of ethical questions or political disputes, then that’s great.

I have, I have no investment in causing controversy. I’m happy to avoid it if that’s where the science leads us. But what I don’t want to do is predetermine this based on a very rigid ideological approach, and that’s what I think is reflected in the executive order that I signed.

WARD: I meant to ask–just to follow up–do you think that scientific consensus is enough to tell us what we can and cannot do?

OBAMA: No. I think there’s, there’s always an ethical and a moral element that has to be, be a part of this. And so, as I said, I, I don’t take decisions like this lightly. They’re ones that I take seriously, and, and I respect people who have different opinions on this issue.