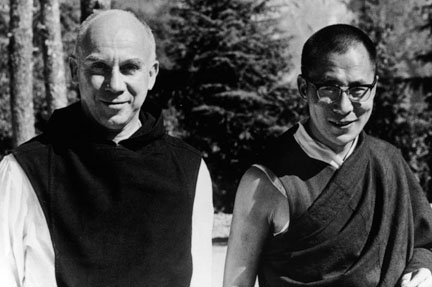 1968 was a true annus horribilis, as the Queen (upending Dryden) might have said, with the assassinations of Robert Kennedy and Martin Luther King and the social upheavals surrounding the Vietnam War ramping up. Then, on Dec. 10, 1968, came the bizarre death of Thomas Merton, the Catholic convert, Trappist monk and enormously influential spiritual writer who was accidentally electrocuted when he touched a poorly-grounded fan as he stepped out of his bath while he was on a trip to Thailand. (merton is pictured here with a young Dalai Lama.)

Merton, author of the great spiritual memoir, “The Seven Storey Mountain,” had grown increasingly interested in Eastern spirituality, which, since his death and the growing conservatism in Rome dduring that period, has raised suspicions about the example of a man many believe should be canonized. Indeed, a few years ago the U.S. bishops replaced a bio entry of Merton in the new Catechism for Adults with an entry on St. Elizabeth Ann Seton. There was an uproar, understandably, as Merton is perhaps the most accessible of Catholics for so many people–I’d include myself in that group, as I am a convert too, and I find Merton’s writings an endless source of inspiration.
In an essay at BustedHalo called “The Belly of a Paradox,” Jesuit priest and Merton devotee (and no mean spiritual writer himself, James Martin, explores the contradictions of Merton’s life, and afterlife:

“Why is this devout Catholic writer, whose autobiography proclaims a triumphal view of Catholicism and faintly mocks other religions, so beloved by seekers, doubters and agnostics? Conversely, why is this Catholic priest rejected in so many contemporary Catholic quarters?”

Also worth checking out is Father Robert Imbelli’s post at dotCommonweal on the coincidence of the death of Merton this day, and the great Swiss Reformed Protestant theologian, Karl Barth.

Can Catholics read the Bible?
archives most recent
More from Beliefnet and our partners
previous posts