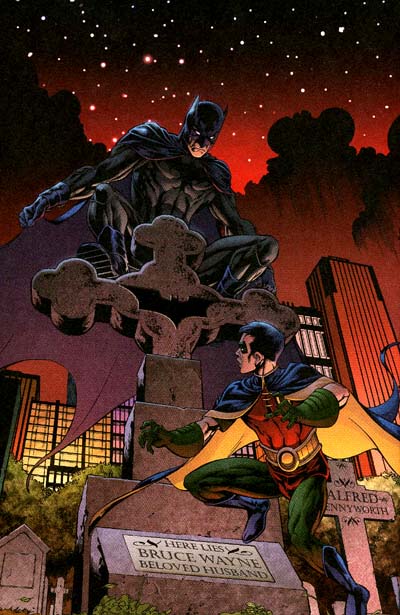 Never thought you’d see that connection, eh? Well, think again. I’d forgotten in my earlier Batman post to refer to one of my favorite superhero pastimes, figuring out the religious affiliation of comic book characters. ReligionLink.org has an edition dedicated to parsing this topic for journos, and it prominently features–as any such discussion must–the website of Preston Hunter, founder of Adherents.com, who has analyzed dozens of comic book characters and has their various religious affiliations on a separate page here.

And Batman? “On the subject of Batman’s religious affiliation, there is some disagreement among fans as well as among writers about whether the character is a mostly lapsed Catholic or a mostly lapsed Episcopalian. There is universal agreement that the character is not an active churchgoer in any faith.” An extended essay and page here, with images. (Given the state of affairs in both churches, I think either answer would be correct.)
So what would Bruce Wayne, er, Batman, make of the doings at Lambeth, where the Vatican’s ranking rep at the meeting, Cardinal Ivan Dias, this week diagnosed the Anglican Communion with Alzheimer’s and/or Parkinson’s diseases? Nice.
Perhaps they’d prefer to deal with The Joker? “The Dark Knight” definitely gets the nihilisitc qualities of the archvillain bang on. Read more…
Think this is all baloney? As Frank Miller, author of ‘The Dark Knight’ series, once put it: “If people can’t stand cartoons about religion, they’ve got a problem.”
Amen.