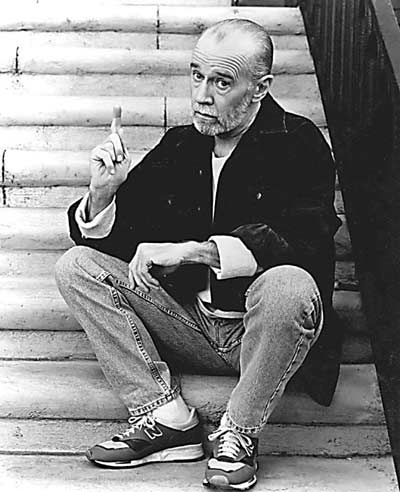 The potty-mouthed, acid-tongued, but often hilarious comedian George Carlin has died, and with him another product of a bygone Catholic culture–the parochial school “class clown” (as he styled himself) who rebelled against all those strictures but got his revenge by making a fortune off the material. Little notice in the earlier obits I’ve seen about his Irish-Catholic upbringing in the Bronx, but much talk of his atheistic, some would say anti-religious material, such as his “Religion is Bullshit” routine. Yet Carlin was, as always, pointing out the inanities of human beings as much as he was the “absurdities” of belief amid a world of suffering. There is a good argument to be made that Carlin was as Catholic in his sensibilities as anyone. He certainly engaged the mysteries more fiercely than most of us. 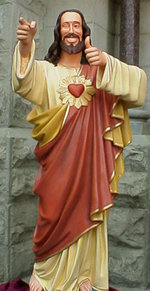 Carlin also was something of a softie–way, way, down deep–and maintained a soft spot for the nuns who taught him as a boy. And more than one nun and priest (and even bishop) I’ve known has affection for Carlin’s memorable turn in the Kevin Smith movie “Dogma” as Cardinal Ignatius Glick, New Jersey’s only cardinal ever, and founder of the “Jesus Wow” movement who unveils the new and improved Jesus, named “Buddy Christ” (at left).
I wish I could find a shot of Carlin as a cardinal, but no luck yet. Here are a couple of his good lines. But please offer your own favorites, or your own take on Carlin–he wasn’t into an afterlife, so he wouldn’t mind you speaking ill of him. But I’ll put up a good defense…
“I was thinking about how people seem to read the Bible a whole lot more as they get older; then it dawned on me . . they’re cramming for their final exam.”
“What about the guy who’s in hell on a meat rap?” … George Carlin’s response when the U.S. bishops waived the fish-on-Fridays rule. 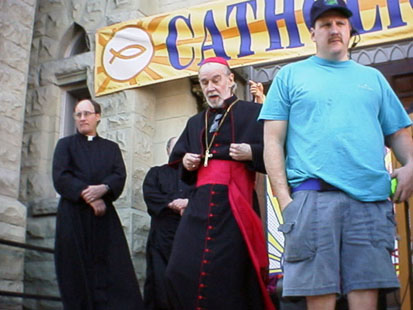 UPDATE: A sharp-eyed friend from Canada (where irreverence IS religion, God bless ’em) dug up a shot of Cardinal Glick, and this note on George Carlin from “Dogma” director Kevin Smith:

“His whole world view as it were inspires this movie, and I thought it was important to have Carlin involved because he’s one of the bastard fathers of the whole thing. He really dug on the idea of playing a Cardinal. He knew that it wasn’t just a joke and he wanted to show what’s at the heart of Glick – who is a salesman but is also totally sincere. George turned out to be one of the most professional performers I’ve ever worked with, giving 150% all the way.” – Kevin Smith