Back in the day, in the 1930’s I believe, there was a young man who was obsessed with eating sugar.  His mother was concerned, knowing that sugar is a ‘bad’ habit and not good for the health of her son, she did her best to break him of the habit.  She reasoned with him, she scolded him, but to no avail.

Frustrated beyond belief (You mothers out there know how that goes, don’t you?), she decided to take her son to see his idol, Mahatma Gandhi himself, hoping that her boy would listen to him.

Making their way to Ghandi was no easy task.  They walked for miles under the scorching hot sun.

Finally, upon reaching Gandhi’s ashram, they found Gandhi himself standing there, and the mother explained, “Bapu, my son eats too much sugar. It is not good for his health. Would you please advise him to stop eating it? ”

Gandhi listened to the woman carefully, thought for a while and replied, “Please come back in three days. I will talk to your son then.”

Mother took her boy by the hand, returned home and in three days time, they once again walked miles in the scorching son, making their way back to Ghandi, at which time he looked directly at the boy and said, “You should stop eating sugar.  It is not good for your health.”

The boy agreed.  He promised that he could end the sugar habit.  The boy’s mother was puzzled.  After all, could he have not said that in the first place, saving them the arduous trip?

She asked Ghandi, “Bapu, Why didn’t you just tell him that three week ago when I brought him here to see you?”

Gandhi smiled and said, “I was not qualified to advise the boy.  At that time, I too was eating lots of sugar.”

First, You be The Change, You Want To See In This World ~  Mahatma Gandhi.

Spread the word … NOT the icing!

Become a Tushkateer!
Tushkateer*  A Tushkateer is a person who receives Our Lady of Weight Loss’s newsletter, called the KICK in the TUSH CLUB!!!  Sign up and receive her weekly e-newsletter with all the news that ‘fit’ to print, and you are automatically a Tushkateer!  How cool is that? 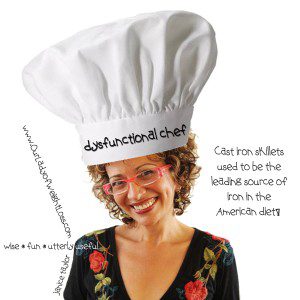 Dysfunctional Chef: How to ... Hard Boil [Easter] Eggs the RIGHT WAY!
archives most recent
More from Beliefnet and our partners
previous posts