Had fear prevailed, we would not know the name “Moses” today. Had Pharaoh triumphed, the story of God’s liberation of God’s enslaved people could not be told. Had a number of women not acted out of compassion and courage, the extermination of a people would have been sharply felt by them but probably forgotten by history.

The closing chapters of Genesis narrate the story of Joseph and his family. Sold into slavery and despair, Joseph eventually finds himself—through God’s help—in the halls of Egyptian power. An interpreter of dreams and a wily diplomat, Joseph helps lead Egypt out of a severe famine. He, his family, and his people are rewarded for their service to the nation, but the rise of a new Pharaoh means that the memory of Joseph and how Israel had helped Egypt in its darkest hour is lost. Political memories are so very short, aren’t they?

As the book of Exodus opens, Moses is born under the reign of a Pharaoh who couldn’t be trouble to learned what had come before. A new Pharaoh enslaves and tries to eradicate a people who had previously helped save the nation. This new king fears these foreigners. He worries that they would trick the Egyptians, deceive them into losing their own land. He frets about their rising numbers and that this great multitude would return one day as an invading military force.

Pharaoh opts for a pair of heartless but ancient tactics: slavery and genocide. Impose grueling labor on a people and soon not only would they be reduced to cogs in a machine but the expectation of a better future would prove impossible. Take the life of every baby boy and soon not only would a lineage be extinguished but the hopes of a people would also be dashed. Soon even the cries of loss would be muffled, and a people no longer deemed useful would be erased.

But where cruelty seeks its victims, courage and grace will also arise. A pair of midwives named Shiphrah and Puah refuses to execute Pharaoh’s demands. In response, Pharaoh ratchets up the pressure, commanding “all his people” (not just the midwives!) to toss each of Israel’s infant boys into the Nile.

Ironically, of course, one boy would float in that same river and rise to lead his people out of the cruelty of Pharaoh’s enslavement. After keeping him in secret for several months, Moses’ mother carefully places him in a basket and set him on the Nile. With Moses’ sister watching from afar and hoping for his protection, he floats right into the home of the same Pharaoh who would have him exposed to the elements.

Pharaoh’s daughter recognizes Moses as one of the Hebrew children and, instead of abiding by her father’s clear orders, assures his well-being and eventually adopts him as her own son. Again, the courage and compassion of a woman exceeds the cruelty of political power and shortsighted fear.

Of course, this story could have been otherwise. Variations on the story of Israel’s enslavement in Egypt have been repeated throughout the ages. An unimaginable number of people have lost their lives due to fear and hatred. Too many even today do not have a Moses to lead them through and out of impossible situations.

Part of the difficulty of reading this story of God’s eventual deliverance of Israel through Moses is the underlying reality in the back of our minds that so many others have not been saved. Even today, Somalian refugees might wonder where their Joseph or Moses is. Where are the dreams that will blaze a path through this famine? Where is the leader who will guide the nation to the promised land?

Watch the Video: Faith in the 2012 Election

With candidates such as Mitt Romney, Michele Bachmann and Rick Perry of the Christian Right taking center stage, J. Terry Todd, Professor of American Religious Studies at Drew University talks about the role of faith in the political rhetoric, on the campaign trail and in the presidency itself.

In the Exodus story as in many of our lives, deliverance and suffering are interlaced. Our hopeful prayers are not always answered, and grace may take a different shape than we might have expected. Moreover, these early verses are a poignant reminder that standing with God often means taking a courageous stance against cruelty and savagery like Shiphrah, Puah, Moses’ mother, and Pharaoh’s unnamed daughter did, even when holding on to hope seemed entirely naïve.

When I think about this passage, at least two more matters strike me. One is that we continue today to fear the encroachment of the so-called “outsider.” When our neighbors begin not to look, speak, or think like us, our primary instinct is not to welcome them or be curious about our differences. Instead, we tend to choose apprehension and fear. We draw inward, hoping for the protection of the status quo and the familiar. Most unfortunate, our churches tend to become cultural cocoons where we can escape the changes our neighborhoods, cities, and nation are experiencing.

American history repeats this tale seemingly every generation. Whether against Italians, the Irish, or Mexicans, prejudice against and fear of the other leads us to worry that these “new” immigrants will so alter the American landscape as to make it unrecognizable. And yet these concerns prove false from generation to generation.

More importantly, in our fear of the “other” and the newcomer, we find ourselves at odds with God. God repeatedly, even habitually, sides with the marginalized, the enslaved, the downtrodden, the weak, the poor. What would it take for us to take God’s side rather than dwelling on our basest fears?

There is a second lesson in this passage that we have yet to heed. Egypt’s new Pharaoh in the opening chapters of Exodus is a commensurate politician. Political leaders too often tend to have extraordinarily short memories and narrow visions for the future. More often than we wish, the powerful amongst us focus almost entirely on the current moment or at least the ever-shrinking election cycle. The past can inform but only insofar as it confirms the politician’s current position. The past that supports us we turn into talking points; the past that works against us is conveniently forgotten. The future can give us a sense of direction but only insofar as it assures continued power. Visions of what may lay ahead are frequently self-serving or pre-determined by our ideology rather than a rallying point for unity and hope.

The role faith plays in politics today is incredibly controversial. Debates about whether faith should be a guide in the voting booth too often deal primarily with the social controversies of our days. That is, faith in politics boils down to particular positions on the most contentious questions of the day.

But what if faith does not provide a particular ideological perspective on specific social issues? What if faith, instead of telling us for whom to vote, directs us how to vote? Our faith invites our politics to become more open and graceful. Our faith teaches us that the present is fleeting, that the past is never just ancient memories, and that the future is not mere abstraction. What if old stories that continue to be repeated around us teach us anew that the past will not conform to our narrow agendas and that the future is not ours alone? 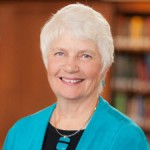