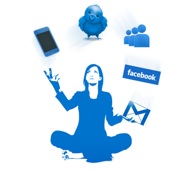 If a zen master were sitting next to the chief technical officer of Twitter, what would they talk about? That sounds like a hypothetical overheared at a bar in San Francisco. But this weekend I saw the very thing at Soren Gordhamer’s Wisdom 2.0 conference — named after his book of the same name — when zen teacher and author Roshi Joan Halifax and Twitter’s Greg Pass sat side by side on a panel discussion on mindfulness in modern life. Seated next to them was Bradley Horowitz, VP at Google managing online apps like gmail, and Twitter advisor and venture capitalist Chris Sacca.

This weekend a number of panel discussions and talks are planned, continually asking the question of how we can have presence and deep connection in our life and yet live in a hyper-connected modern world. Speakers include Silicon Valley technologists, neuroscientists, authors, journalists, and serious meditators. I’m really excited; it is a mashup of two worlds I love dearly: contemplative paths and technology. More after the break, and in followup posts this weekend.

Soren’s questions to that first panel are things perhaps we’ve all wondered lately, “How do we manage the torrent of information?” and “Can we be engaged and still show up for the people in our life and be truly connected?” In other words, with our connected lives increasingly mobile and information continuously streaming to us, from Facebook friend feeds, Twitter, and the endless flood of email, is connecting to our lives and being present necessarily taking breaks from that flow, or is it possible to still be connected to the trees and the clouds outside while also being hyper-connected to people online.

I was surprised to learn that Roshi loves computers and even has a Blackberry, appreciating both their connectivity and how they’ve helped her as a writer. She called them treasure boxes. She noted that with all this connectivity, the Dharma can be metabolized now in so many new ways. In just the last ten years, one can now find almost the full Pali canon and translations of Dogen online for free. And she appreciated how one can feel the immediacy of the suffering in the world. For example, by tracked the recent protests and suffering in Iran with Twitter. But her main concern it seemed was the need for “warm hand to hand” connection as well. That these new forms of hyper-connectivity were not a substitute for that kind of connection. She said she would feel impoverished without Twitter, and yet is deeply concerned at a growing population of young teens in Japan and likely in the West as well, who never leave the house and only connect with friends virtually.

The three technologists all seems to share a common view that the tools are evolving to allow more selective attention and filtering. Being distracted by trivia is just a waste, but accessing the information that you do value at the right dosage is empowering. Google’s Bradley noted that attention is a limited resource, and that with better tools we could move from continuous interruption and distraction to more effectively staying in “flow”, like a sufi dancer. Twitter’s Greg also noted selectivity and reducing what we take in to only the things we value highly.

Chris made some interesting points about interruptions, and how he drops out of flow if the phone rings or he gets a text message. He refuses to give out his phone number as a result, and he prefers people direct message him on Twitter to get a hold of him. Why? Because then he can control which people route to his phone. Twitter lets you set for each person who messages you whether they forward as text messages to your mobile device, or whether he’ll see their message later. Similarly, he’s trying to move away from using his email inbox as a priority list, describing it as a priority list that only other people control and can add to.

One thing that alarmed me in the discussion, though I have to agree with it in my experience, was the notion that Facebook and Twitter have a moral impact on our society. If we’re living an increasingly transparent life, and we’re more concerned with how we’re viewed and people know more about what we do, then that will encourage more virtue in our lives and discourage poor behavior. Roshi expressed this as a positive about the new technologies, and that degradation of privacy trend disturbs me at the same time. Even Chris was alarmed when Foursquare had his house listed as a location — publicly viewable — for awhile. No one brought up the related problem of bullying, and how more open and sometimes anonymous forums are causing great suffering.

Roshi felt dissociation from the real world was a concern of these new technologies, and at the same time the ability to feel more compassion for the larger world and what’s going on real time was a benefit. Chris to this offered my favorite quote, “Trees and clouds don’t fit within 140 characters.” But I’m not sure the technology panel members had much to offer for that concern. They agreed that the metastasizing awareness of suffering was a powerful force for good. With over a million twitter followers, Chris could rally support for clean drinking water projects in Africa easily. But also with that many followers, he has to take great care in what and how often he posts and feels a sense of responsibility to not waste his readers precious time. Twitter is better then bracelet awareness campaigns now.

Overall I loved this panel; I hope it’s posted online to watch again after the conference. I was surprised to learn that Google’s Bradley has been a life long meditator and Twitter’s CTO Greg teaches Chi Kung at the office. I used to suspect Twitter was just an external analog to my discursive mind-stream. And now I have a greater appreciation for both how it’s evolving, the positive affect it has had, and how even a great Zen master might embrace it. And I’m also curious at how communication technologies will evolve. The phone and email developed mostly constrained by their underlying technologies, and our behavior is greatly influenced by how they function and their implied contracts of usage, but as we no longer are constrained by physical telephone lines and simple messaging protocols, we can reshape how we communicate so that they’re less interruptive and increase the quality of connection. And yet, it’s a challenge still to stay deeply connected to both the present moment and close friends if we’re more hyper-connected to the world.

read next post
The Buddha at Work - "All we are is dust in the wind, dude."
archives most recent
More from Beliefnet and our partners
previous posts