Buddhist Quote of the Day: Misunderstanding the Ego by Mark Epstein 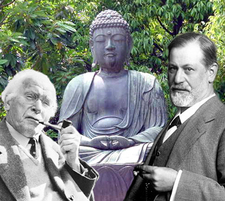 I am pretty darn psyched (no pun intended) to be co-teaching a four week series on Buddhism and Psychology at the Interdependence Project with my friend Dr. Miles Neale. If you are in the New York Area, drop in tonight, or listen along to the series at home, wherever you are. Below is a great quote of the day by Buddhist psychologist Mark Epstein that serves as a great hors d’oeuvre for what we will be discussing and practicing tonight:

“Meditators with this misunderstanding [of the self] often feel under pressure to
disavow critical aspects of their being that are identified with the
“unwholesome ego.” Most commonly, sexuality, aggression, critical
thinking, or even the active use of the first person pronoun are
relinquished, the general idea being that to give these things up or
let these things go is to achieve egolessness. Aspects of the self are
set up as the enemy and then attempts are made by the meditator to
distance oneself from them. But the qualities that are identified as
unwholesome are actually empowered by the attempts to repudiate them!
It is not unusual to find meditators in therapy insisting that they do
not need sex or have no need for an orgasm, or denying feelings of
anger. Rather than adopting an attitude of nonjudgmental awareness,
these meditators are so concerned with letting it go that they never

experience the actual insubstantiality of their own feelings. In a
similar way, those with this misunderstanding of egolessness tend to
overvalue the idea of the empty mind free of thoughts.” In this case,
thought itself is identified with ego, and such persons seem to be
cultivating a kind of intellectual vacuity in which the absence of
critical thought is seen as an ultimate achievement. As Robert A. F.
Thurman describes this misconception:”One just refutes all views,
dismisses the meaningfulness of language, and presumes that as long as
one remains devoid of any conviction, holding no views, knowing
nothing, and achieving the forgetting of all learning, then one is
solidly in the central way, in the silence of the sages.”

-Mark Epstein
from Freud and Dr. Buddha: The Search for Selflessness
in Tricycle: The Buddhist Review