Buddha of the Week

On a recent visit to San Francisco, I visited the Japanese Tea Garden and ran into this wonderful bronze buddha statue.

There really was something that struck me about this statue at that moment. It was my first visit to SF, and I’d spent a pretty magical day w/my husband in the very great Golden Gate Park, which reminded me of Central Park,
NYC, only with a Pacific Ocean beach at one end and some bison in the
middle. And the Japanese Tea Garden. Right at that moment I felt a great sense of peace. Momentary, of course, and entirely dependent on impermanent causes and conditions.

The garden has a history; it was built for a big exposition (like a world’s fair) in 1894. Signage in the garden stated (and the website repeats), “Makoto Hagiwara designed the bulk of the garden and was officially
appointed caretaker in 1894 until the hysteria surrounding World War
II.”

The “hysteria surrounding World War II” refers to the internment of Japanese Americans, including the Hagiwara family, in concentration camps in the American West. As the website goes on to say, “In the years to follow, many Hagiwara family treasures were liquidated from the gardens, but new additions were also made.” 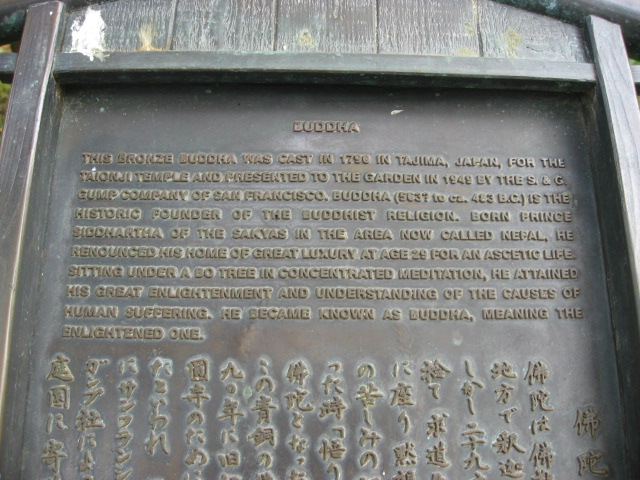 This buddha was one of them.

Evidently, after Japan was defeated by the atomic bomb in World War II, a large American department store company bought this statue and donated it to the garden, whose longtime devoted caretakers, the Hagiwaras, had been sent to concentration camps by US authorities. Makoto Hagiwara, founder of the clan in America, is often credited as the inventor/introducer of the fortune cookie. What a lot of history.

Seeing the statue here and reading the plaque reminded me of how yes, we are in the present. It is always and only now, but the causes and conditions of this present moment are myriad and mysterious, resistant to our “make it make sense!” narratives and predictions.

But still, worth looking at. Causes, conditions, bison, and bronzes alike.