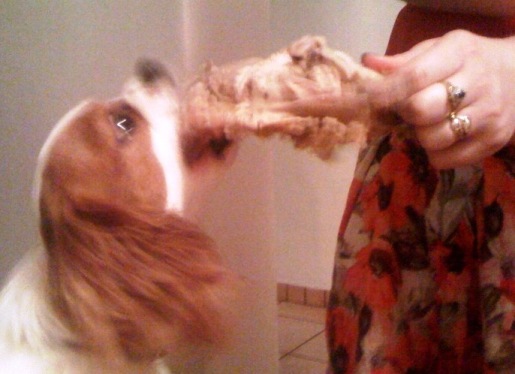 Unlike Sid, Lodro’s dog Tillie is a big fan of the turkey

Before
Siddhartha Gautama attained enlightenment at age 35 he was a confused
twenty and thirty-something looking to learn how to live a spiritual
life. He had an overbearing dad, expectations for what he was supposed
to do with
his life, drinks were flowing, lutes were playing, and the women were
all about him. Some called him L.L. Cool S. I imagine close friends
just referred to him as Sid.

Many people look to Siddhartha as an example of someone who attained nirvana, a buddha. But here we look at a younger Sid as
a confused guy struggling with his daily life. What would he do as a
young person trying to find love, cheap drinks, and fun in a city like New York? How would he combine Buddhism and dating? We all make mistakes on our spiritual journey; here is where they’re discussed.

Each
week I’ll take on a new question and give some advice based on what I
think Sid, a confused guy working on his spiritual life in a world of
major distraction, would do. Because let’s face it, you and I are Sid.

After a delicious Thanksgiving meal I saw the carnage of a leftover turkey and felt great remorse. It became very clear to me that my family had killed a living being and eaten it. Unfortunately, it was delicious. What would Sid do? Would he become a vegetarian in today’s world?

The simplest (and perhaps most satisfying) answer is yes. I believe that if he lived in today’s world Sid would be a vegetarian. When he became a buddha he was pretty clear that the first of the five
main precepts of his disciples should be “I undertake a vow to abstain
from taking life.”

The surprising thing is that the no-meat stance is not generally agreed upon, despite that precept. Theravadin schools of Buddhism say that the Buddha allowed his monastic students to eat pork, chicken and beef if the animal was not killed for the purpose of providing food specifically for them. And that was just for monastics; lay people could eat whatever sort of elephant or horse meat they could find. So to be clear: the act of eating meat was deemed karmically neutral. The act of killing or having something killed for you to eat was karmically negative.

Over time though many savvy consumers (Happy Black Friday everyone) have raised a finger and said, “But what about supply and demand?” At first it may appear that the Buddha did not buy into that particular logic when making this decision. Since alms were basically leftovers from lay households it was argued that the meat was not directly linked to the monks or nuns’ karma. It’s as if I showed up at your home yesterday and you gave me whatever leftover turkey you were putting in the fridge. By this argument I would take whatever you gave me and not be karmically responsible.

Some people may find that argument convincing. I myself think that it’s a bit of a cop out; if I eat the last of your turkey who’s to say you won’t wake up the next day, wish it were still there, and go out and get another one?

Over time different schools of Buddhism have placed differing levels of importance on vegetarianism. Certain Vajrayana practices actually call for the consumption of meat. Add this religious context to the existing cultural one (it’s incredibly hard to grow vegetables in Tibet, whereas yaks are all over the place) and you develop a certain flexibility for Tibetan monastics. Tibetan Buddhists generally respect the “three condition” rule where it’s a neutral act if the meat is not seen,
heard or suspected to have been killed for you. I’ve also heard a three hand rule where if the meat is slaughtered by one person, sold to another, and cooked by another before it reaches you your karma is not directly related to the death of the animal.

Even His Holiness the Dalai Lama continues to eat meat. While some people have taken him to task for doing so he has stated that his doctors have recommended it and continues to be a carnivore while still imploring other Buddhists to become vegetarians.

While I understand someone having to eat meat for health reasons I think that in modern Western society it’s not too hard to be a vegetarian. I think if Sid were not collecting alms but held a job and bought all his own meals he would likely choose a falafel over a Big Mac. I personally believe that Sid would hold the life of animals in such high regard that he would go out of his way to be a vegetarian.

However, I think that if he were out in the middle of nowhere at a friend’s barbecue with no vegetarian options in sight he would accept a burger if it were passed his way. He would then eat said burger with appreciation in his heart for the animal that gave his or her life to feed him and his friends.

As with everything on this spiritual path we need to determine what makes sense for us. While discussing becoming vegetarian with my girlfriend she pointed out that as I am not the best chef in the world I may find it a somewhat more expensive lifestyle than a cheap meat based diet. While I am still on the fence about going cold turkey (pun intended) I do intend to be more mindful of my meat intake, relying on meatless options more readily. For me, that is what makes sense for now. Best of luck determining what makes sense for you.