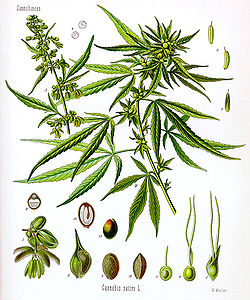 me of the infrequent and yet ongoing conversation about Buddhism and drugs. I recently read a paper published at Erowid, titled Psychoactive Plants in Tantric Buddhism, specifically discussing cannabis and datura usage in various Tantric sources. Then there was a Tricycle issue devoted to the topic of psychedelics, followed by Allan Hunt Badiner and Alex Grey’s book Zig Zag Zen about Buddhism and psychedelics. I shouldn’t be surprised that there’s a synergy for people interested in the inner workings of the mind to explore many mind altering mechanisms. But this then highlights again the difference between renunciant-style Buddhism where intoxicants are avoided per the precepts, and later yogic-styles of Buddhism where anything goes. I wonder if the renunciant style is more in accord with Western puritan culture.

In the Erowid paper, the authors find a number of references to cannabis in Buddhist texts, some as medicinal references and some as practice elements. But the research is still slim. They note that yogi’s practicing the Tara Tantra were required to mix cannabis and alcohol for effective meditation practice. In the Mahakala Tantra it’s included among a long list of medicinal recipes and described as the “perfect medicine” according to W. G. Stablein’s doctoral dissertation from Columbia, and then also recommended there as an elixir to transform the body and mind in the service of liberation. And D.B. Gray’s translation of the more popular Chakrasamvara Tantra includes the quote that cannabis will help one “become a yogin who does what he pleases and stays anywhere whatsoever.”

Renouncing intoxicants makes easy sense. If one is practicing meditation to become more and more clearly aware of the mind stream, then why ingest anything that makes that mind more fuzzy. If I were to guess why intoxicants have such a strong tradition in tantra, and this is just my own hypothesis, it’s that the unpracticed mind is inherently fuzzy already so it’s useful to practice directly with that quality. This has something to do with creating more contrast. Mindfulness meditation would be just one example of increasing contrast in a gentle way. Interrupting the ordinary flow of thoughts makes the mind stream more clearly visible. But then anything might cause one to sharpen the contrast and see what’s going on more clearly, if it were used with that intention. That could include visualizing the world in a different way, or just approaching things in a new way intentionally. Dzongsar Khyentse Rinpoche recommended off-hand once that one could wear work clothes to bed and pajamas to work. I consider that suggestion in the same vein. It’s not that being an odd person is helpful, but doing things to bring up emotions like embarrassment could be a way to have more contrast in one’s day.

But then I can see why practices like that are just not recommended widely. For me personally, there’s enough coming up in a day already to have contrast around. If I were better practiced perhaps, and to the point where interpersonal relationships weren’t already providing enough to consider, then sure I could do things to amp up my practice. But there’s no need. I have plenty to work. I suspect if I tried inviting more chaos through intoxicants or other means now then it would just create more chaos in my day and I wouldn’t gain from it. Worse, I’d be fooling myself and just thinking that I’m doing something spiritual. But I’m not sure I can criticize anyone for that approach, since it’s up to each person to know where they’re at.

read next post
The Buddha at Work - "Ethics, Shmethics, So Long as I Get Paid."
archives most recent
More from Beliefnet and our partners
previous posts