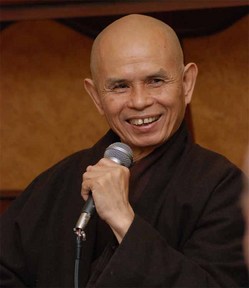 I too, was lucky enough to get tickets to see a very timely talk by Zen Monk Thich Nhat Hanh today in New York City.  He spoke of the importance of building peaceful and compassionate communities, just a day after the surprising announcement that Barack Obama had won the Nobel Peace Prize…for maybe doing that in the future,

Thay (as he is called by his students) had two main messages today, both of which stem from the Buddha’s teaching on the four nutriments. (Edible Food, Sense Impressions, Intention, and Consciousness)

The first main point was that as citizens of the world, we should nourish the peaceful intentions of President Barack Obama.  In the midst of his grand visions of nuclear disarmament, a peaceful middle east, and healthcare for everyone in our country, the President has to put up with a lot of unhealthy aggression and entire organizations that are out to do him in, no matter his effectiveness.  Now more than ever the president needs us to nourish his peaceful intentions, both as a motivation and as a symbol of our being a community of peace.

The second, and possibly even more radical point he made was that:

“Just the practice of mindful eating could save the planet“.

Mindful eating includes first choosing the right kind of food to eat
(low environmental impact and no harm to other beings.)  Then in the
moment of eating you should practice chewing your food 20-30 times per
bite and contemplate phrases like “Each morsel of Food is an ambassador
from the cosmos”, or “This food is a gift of the universe, may I be
nourishment to my brothers and sisters.”  Thay invited the entire
2,000+ people in the Beacon Theater to eat together, so we could
practice this as a group.

His soft voice was very simple and
direct: “When we put it into our mouth, we know what we are putting
into our mouth” “…just enjoy the piece of carrott. This is a
miracle”. From his point of view, being in intimate connection with our
source of Food is as political an act as organizing a community or
marching on Washington.

Maybe it is Michelle Obama then who should have gotten the Nobel Peace Prize for planting an Organic Garden on the White House Lawn.

read next post
Thich Nhat Hanh: A Day of Mindfulness
archives most recent
More from Beliefnet and our partners
previous posts