The ultimate truth is fearless

Over the last few days our friend Waylon Lewis, editor at elephant journal, blogged about allegations he had recently discovered about Chogyam Trungpa. Waylon was convinced they were false, and suggested that a reference to it on Wikipedia, be deleted pronto, and he also sent an email to the Shambhala International internal listserv urging the community to do the same.

Rinpoche, of course, was famously controversial, but to some degree that controversy has always been diffused by the knowledge that his life was an open book and he hid nothing. Sadly, that second part may be untrue. The material in question is from The Other Side of Eden, a memoir written by John Steinbeck IV and his wife and published in 2001 by a major publisher. Steinbeck, son of the novelist, was a respected journalist in Vietnam. He was also one of Rinpoche’s kusung (personal attendants) and part of the inner circle of the era, and by all accounts a man of personal integrity. The passage in question alleged that Trungpa Rinpoche had a serious cocaine and Seconal habit, and that this was careful kept secret from the community, among other things.
The passage quoted from their book is definitely shocking and incendiary, but I don’t think we can jump to the conclusion that it is untrue. To my knowledge, none of the other senior students of Trungpa Rinpoche who are in positions to comment have denied that these things are true. I’m guessing that the book flew under the radar until now because the title does not suggest it has anything to do with the sangha.
What does all this mean? Well, I can’t say personally that I am surprised about any of the content itself, really. What does surprise me (if it is true, and I suspect that it is) is that Rinpoche was secretive about his heavy coke and pills use, and that many of his senior students have misled us about it all of these years. That is something that I find deeply disappointing and disturbing. I think that is the critical point here. As Waylon noted, we’ve always been told that he was totally open about these things.
All the same, I am still quite proud to be a part of Shambhala and a student in the lineage of Trungpa Rinpoche. The reaction of the sangha on the listserv was varied. Some people felt that revealing any information that potentially makes Rinpoche look bad could only come out of hatred. Others felt that the best policy is to be as open, honest, and unsecretive about these things as possible. As you can tell, that is how I feel, and I am proud that so many of my fellow sangha members feel the same way and are willing to say so publicly.
Some make the case that new and potential students will be scared off by this information before they connect with all of the good things that the lineage has to offer. I think that is a chance we have to take. The alternative (what used to happen pre-internet) is that these things get shared piecemeal, through the rumor mill at programs, often after a student has given years of their lives and thousands of dollars to the sangha. I don’t think that is right, or ultimately helpful for anyone. As Rinpoche once wrote, “the ultimate truth is fearless,” and I think people are entitled to it in all of its relative permutations.
Unfortunately, the Buddhist media–Shambhala Sun, Buddhadharma, and Tricycle–generally doesn’t touch anything remotely controversial. I am quite grateful that I live in the internet era, where information can be disseminated by other means. I also want to be clear that I don’t intend to be critical of Waylon, who was clearly acting out of shock in the spur of the moment.
The other night I tried to explain the view of the “party line” on this one to my girlfriend, who is not involved with Shambhala. The view according to which Trungpa Rinpoche was a mahasiddha, so therefore, like the mahasiddhas of old, everything he did was utterly selfless and for the benefit of others. I had such a hard time even getting the words out of my mouth that I had to admit to myself that I don’t believe that, and never did.
But that’s ok. I do believe that Trungpa Rinpoche was a brilliant teacher who left us an amazing legacy of teachings. I also am sure that he showed an enormous amount of kindness, generosity and compassion to thousands of people. I can certainly accommodate the idea that he was also a flawed human being who made serious mistakes that caused a lot of harm. I really hope Vajrayana Buddhism as a whole can eventually come around to this view–about Chogyam Trungpa and all teachers–or else I think we have not seen the last of the devastating scandals. 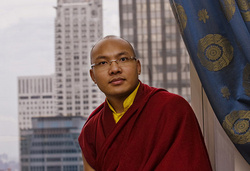