This is a guest post for the One City Blog.

—–
Evelyn Cash is a Soto Zen and Vipassana meditation practitioner living in Wichita, Kansas. She works as an engineer.

No matter how you slice it, I am definitely in the minority.  I am an
African-American female twenty-something Buddhist who lives and works in
Wichita, Kansas.  I’m a dreadlock-wearing, mala-carrying, zazen-sitting
oddity in this reddest of red states and, honestly, I can’t really imagine
being any other way (although, I do wish I lived in a purple state at
least). 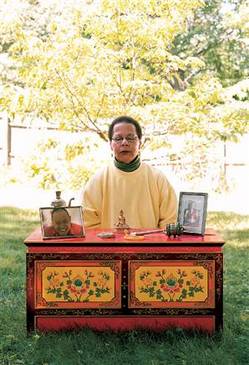 I’m pretty accustomed to being the only person who looks like me
in a room.  I graduated from Ohio State with a degree in Aerospace
Engineering and it wasn’t unusual for me to be the only African-American
student in most of my core classes.  As a kid growing up in the suburbs,
the only parts of my life that were predominately black were family reunions
and church.  So, I don’t feel at all uncomfortable as the only African-American
in the zendo, although the question of why you don’t find more black Buddhists
has vexed me over the years.

[photo opposite of Dr. Jan Willis courtesy of www.buddhistchannel.tv ]

You
may be asking yourself, “How did a young black woman come find herself sitting
zazen in Kansas?”  It is a long sordid tale, filled with excitement and
adventure, I promise you, but I don’t want to make this column too long so I’ll
give you the short version.  I learned about Buddhism in my Catholic high
school comparative religion class but I had little more than a basic text book
understanding of the dharma.  Later, I learned to meditate at a
Unitarian-Universalist Church in Cleveland, OH while at home from college one
summer.  In early 2006, I stumbled upon Gil Fronsdal’s dharma talks
through the Zencast series of podcasts and began to learn more about the
Buddha’s teachings and how Buddhist meditation really works.   I
began sitting regularly after listening to one of Gil’s “Introduction to
Meditation” series of talks.  After
graduation, I landed an engineering job in Wichita, KS so my fiancée and I
picked up and moved to Wichita.  About a week after moving, we were
already looking for a Buddhist meditation group and quickly found that there
weren’t many choices.  We found a Soto Zen Sangha and have been sitting
with them ever since.  It’s a small group (only about 5-7 regulars) made
up primarily of several lay-ordained teachers who take turns giving short readings
and dharma talks.  Our group is associated with the Atlanta Soto Zen
Center and the abbot comes to Kansas once a year for dokusan (one-on-one
interviews) and to lead a weekend retreat.  My husband and I took formally
took refuge and got married in a joint ceremony in May 2007.

Because
of my situation, my practice has taken on a bit of a “hybrid” quality that
works well for me.  I was initially introduced to the Theravadan tradition
through Gil’s Vipassana dharma talks and I still find that my rather analytical
style of meditation continues to resonate with that tradition.  I sit with
a Soto Zen group so I’ve naturally also been exposed to the Zen approach to
Buddhist practice.  In my experience, the two can actually complement each
other very well.  In a lot of ways, the Zen idea of shikantaza or “just
sitting” is similar to mindfulness meditation.  In Zen, we’re taught to
just sit with whatever arises both internally and externally; mindfulness works
in much the same way.

So,
Ethan was curious about what it would be like to practice Buddhism without out
a lot of peers.  I’ll address this from the easiest to define to the more
difficult.  As a female, I’ve heard dharma talks and sat with women more
times than I can count so this has not been an issue in the least.  There
are also many dharma books on the shelves written by female teachers such as
Sharon Salzberg, Pema Chodron and Thubten Chodron although I’d certainly like
to see more.

As
for being a relative youngster in the zendo, I’ve found that practicing with
people who have been meditating for decades can be very helpful and
inspiring.  They also show by their
example that Buddhism can be successfully practiced by working stiffs like me
and you don’t have to give up the householder life to make progress.

Practicing
Buddhism in Kansas is a little more difficult than it must be in larger
metropolitan areas such as New York or San Francisco.  The choices of
Dharma centers are limited but I managed to find a group that I enjoy.
With the internet, books and dharma publications these days, we can learn about
any school of Buddhism we wish and this can be both a blessing and curse.
In addition, there are many retreat centers throughout the country that we can
travel to if we have the time and resources.  Because of my job, I haven’t
had a chance to sit an extended meditation retreat but I still have the goal to
attend a week long at some point.

as I mentioned above, practicing as the lone African-American can be a bit
vexing.  Since the earliest days of my practice, I felt a real desire to
find any stories I could get my hands on about black folks who were also
Buddhists or (even better) Buddhist teachers.  Unfortunately, there aren’t
many that I’ve been able to find.  The first names you often read are Tina
Turner and Herbie Hancock but they practice Soka Gakkai, a form of Nichiren
Buddhism that I have trouble relating to as a Zen/Insight meditator.  I
have come across a few books that helped inspire my practice, but I have yet to
meet a fellow black Buddhist in person.  Early on, I found a book entitled
“Meeting Faith” by Faith Adiele about
her experiences as an ordained nun in the Thai Forest tradition.  She was
a near dropout from Harvard who entered the monastery with no idea what she was
getting in to.  I appreciated
Faith’s honest account of her experiences as a Buddhist nun but she is not a
practicing Buddhist and so I see her as a fellow traveler on the spiritual
journey but one who is on a different path than my own.  Later, a Sangha
member introduced me to Jan Willis’ memoir, “Dreaming Me.”  Where I felt I could
relate to Faith as a fellow seeker, I saw Dr. Willis as someone I could look up
to as an example of feminine black Buddhist practice in America.  Jan is a
professor at Wesleyan who practices Tibetan Buddhism who grew up in the
segregated, racist south of the pre-civil rights era.   Her story
showed me that the Dharma can speak to black women in America and confirmed my
personal belief that the Buddha’s teachings are a natural fit for African-Americans
who have a long history of suffering in this country.  I was thrilled to
hear that she was named “Outstanding Woman in
Buddhism” for 2009 in Bangkok Thailand.  I would recommend both of
these books to anyone on the path of practice and especially to fellow young
black Buddhist women.

I
can say, without reservation, that the teachings of the Buddha resonate with me
as a person of color in America.  I understand that most black people find
inspiration in the Christian tradition and I have great respect and love for my
Christian brothers and sisters.  However, I feel that the Four Noble
Truths and the basic teachings of the dharma are universal and can inspire all
people, regardless of their background; and for me, Buddhism provided a path of
practice that resonated on many levels.
As a black Buddhist, I may be in the minority but we can all learn from
people who are different from us.
Different voices bring different perspectives; it’s always good to bring
everyone to the table.  So, I am
happy and humbled to share my experiences and I hope we continue to hear more
diverse voices as Buddhism grows in the West.

read next post
In the Times today . .
archives most recent
More from Beliefnet and our partners
previous posts