Rilke, like Rumi or Gibran, wrote almost exclusively about the spirit.  Or course I feel in over my head trying to say something new and insightful about Rilke’s works–“A god can do it.  But tell me how a man / is to follow through the narrow lyre?”–but I do want to take a moment to discuss Rilke’s process, particularly how Rodin influenced and shaped Rilke’s singularly contemplative process.

For the dharma poem of the week, I’ve chosen one of Rilke’s famous object-poems, “Archaic Torso of Apollo”, a poem about this statue: 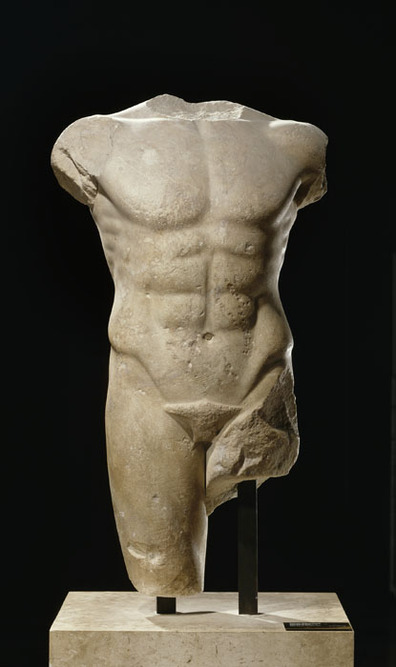 We never knew his stupendous head
in which the eye-apples ripened.  But
his torso still glows, like a lamp,
in which his gaze, screwed back to low,

holds steady and gleams.  Otherwise the curve
of his chest couldn’t dazzle you, nor a smile
run through the slight twist of the loins
toward the center that held procreation.

Otherwise this stone would stand mutilated and too short
below the translucent fall-off of the shoulders,
and wouldn’t shimmer like a predator’s fur;

nor shine out past all the edges
like a star: for in it is no place
that doesn’t see you.  You must change your life.

So where’s the dharmic connection here?

The dharmic connection lies in Rilke’s process.  In 1902, Rilke joined his mentor Rodin in Paris for what was to become a formative 12-year artistic apprenticeship.  In other words, Rilke found his teacher.  The sixty-ish Rodin initiated the 26-year old Rilke into the esoteric art of clear-seeing.  If that slippery Buddhist term–clear-seeing–has any meaning for me, it is precisely in how I understand what Rilke is saying in this poem.

Rodin told Rilke to stop writing about his childhood and to stop writing about love.  He said, Pay attention to everyday objects, and let these be your subject.  He gave Rilke explicit contemplative exercises; he said, Go to the zoo, look at the animals, or, Stare at this tree for six hours.  Rodin endeavored, like any good dharmic teacher, to point out to his student the luminosity of the natural world, and encouraged him to make this world his subject.

Rilke responded with his famous series of object-poems, in which he sought to see the object clearly.  I imagine he stared at the Apollo statue for a long time before he dared write a word about it.  Notice the preponderance of light words in this short poem: “glows,” “lamp,” “gleams,” “dazzle,” “translucent,” “shimmer,” “shine,” “star.”  The torso is exploding into pure light before Rilke’s meditative eyes.  Moreover, in the poem’s bewitching last line, the statue speaks to Rilke, saying, “You must change your life.”

Professor Bernd Jager writes, “Rilke’s poem explores that precise and pregnant moment when an object of scientific investigation, aesthetic contemplation or historical analysis suddenly breaks free from the constraints imposed upon it by a workaday perspective and transforms itself into a subject who beckons us to enter another world.”  For a further discussion of the poem from a poet’s perspective, read Mark Doty’s thoughts here at poets.org.

Or, for more on the Rilke-Rodin fall-out and how Rilke felt completely abandoned–echoing a textbook guru-student relationship–see Ruth Walker’s review of Rilke’s monograph of Rodin.

What do you think?  Obviously Rodin wasn’t teaching Rilke about yidams or mahamudra practice.  But do you think Rilke’s process or resultant poem is dharmic?  Was Rodin a kind of sculptor-guru?