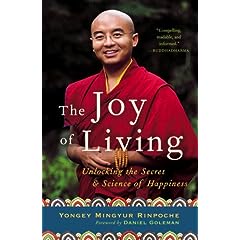 The paperback edition of Mingyur Rinpoche’s The Joy of Living (Three Rivers Press, just released) is about to hit the NY Times bestseller list at #12, and everyone at my office is super excited (and conditionally happy). What better book to sell a million copies than this? It was originally pitched as “The Buddha, the Brain, and the Science of Happiness,” a descriptive title if not catchy, and that’s essentially what it is: a young Tibetan monk explains the amazing similarities between ancient Buddhist practice, quantum physics, and 21st century neuroscience — and what it all means for achieving happiness, for ourselves and sentient beings everywhere.

As a kid, Mingyur Rinpoche suffered from what we in the west would call an anxiety disorder. Through years of meditation practice — he entered his first three-year retreat at 13 — he mastered his own mind to such an extent that neuroscientists at the Waisman Laboratory in Madison, WI, thought their EEG equipment might be broken when Rinpoche’s readings for happiness went off the charts. So begins this book — with the young Rinpoche’s fascination with modern science, including his willingness to submit to fMRI scans, and the fascinating parallels to Buddhist philosophy he discovers along the way. The core message isn’t new: meditation can change the brain, and through practice we can teach ourselves to be happy — but the book itself is something special: written in language you or I can understand, anchored in the science we westerners revere as gospel, and wrapped up in an entirely charming package. Who doesn’t want to learn from the happy monk? I’ll end with that — I’m an enthusiast, neither a reviewer nor a critic — and simply tell you to go get your copy now — and bump this one up to #1 on the bestseller list the week after next.
read next post
Idle is the New Ambitious
archives most recent
More from Beliefnet and our partners
previous posts