American culture is circling the drain faster and faster, but most of us are too caught up in the frenetic pace of our lives to notice the dramatic changes that have sent our country spinning out of control, says New York Times best-selling author Dr. David Jeremiah.

“We live in a ‘cynical age of situational ethics, when atheists are shaking their fists at God, Jesus is the butt of crude jokes, the Bible is treated no better than a coffee table book of trite proverbs, and ‘war’ and ‘marriage’ are being redefined daily,” says the host of the Turning Point radio program and senior pastor of California’s Shadow Mountain Community Church.

“Toto, we’re not in America anymore,” says Dr. Jeremiah, only half-jokingly. “America today is not the America it was.”

This has been so disorienting, he explains, because “America’s departure from God’s standard has occurred so slowly that many of us do not realize just how far we’ve drifted.”

In a new book I Never Thought I’d See the Day! Culture at the Crossroads, Dr. Jeremiah examines the dramatic cultural and social changes of the recent years from a biblical perspective.

“There is a hunger for answers,” he says. “Many, many Christians across the country and around the world have suffered. They want answers.”

In his book, Dr. Jeremiah addressed nine issues, all of which he believes have significant implications for America and the church. He asks, for example: “Who thought we would ever see the day when atheists would be angry?

“Atheists have become intolerant and vocal, railing against God with fanatical zeal,” he says — and shows how the movement has abandoned rational thought and resorted to toxic vitriol and groundless accusations.

“Who thought we would ever see the day when Christians wouldn’t know they were in a war?” he asks. It’s a spiritual war!

“The spiritual battle against Satan continues, but Christians cannot hope to achieve victory in war of which they are unaware,” writes Dr. Jeremiah brings his knowledge of Scripture and military strategy to bear with the hope that Christians everywhere will heed his warning and arm themselves.

“Who thought we would ever see the day when Jesus would be so profaned?” he asks. “When Jesus is featured in profane ways on television shows like South Park, He is reduced from His biblical stature of divine and holy to a cultural characterization of crude and common.”

Dr. Jeremiah says that we are personally obligated to limit what we approve, what we call entertainment, what we say and think, and what we tolerate.

“Who thought we would ever see the day when marriage would be obsolete?” he asks — cautioning that the degradation of this most basic social building block threatens the stability of society as a whole.

Other questions he examines: “Who thought we would ever see the day morality would be in freefall? When the Bible would be marginalized When the church would be irrelevant?”

A community’s churches used to be considered a source of life and light, their light has grown increasingly dim.

The changes in America’s culture during recent decades have made us long for a simpler time, he notes.

Disturbing as the reality of America’s descent may be, Dr. Jeremiah remains optimistic — not about man’s ability to solve these dilemmas, but rather, about God.

“I do not mean that I expect God to swoop down and return America to the good old days. I don’t think that’s biblically realistic,” he says. “So what is there to be optimistic about? I am optimistic about God’s ability to transform us–to raise us higher as the world sinks lower.

“The only solution is to follow a different path from that of the disintegrating world around us.” 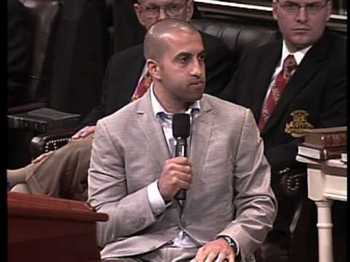