Is there proof this candidate for Catholic sainthood had an abortion? 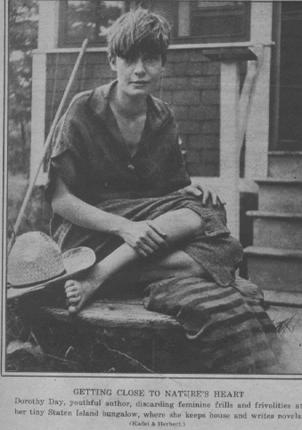 Is it possible that a social activist being considered for Catholic sainthood underwent an abortion?

“The Catholic Church considers abortion to be murder of an innocent human being, and an unspeakable evil,” she reports, “and so some people might be surprised that a woman who is being seriously considered for sainthood also had an abortion.

“New details have recently been released about the abortion that social activist and Catholic convert Dorothy Day, whose cause for canonization was opened by Pope John Paul II, underwent prior to her conversion.

“While it is public knowledge that Day had an abortion during her days as an agnostic and social radical, the activist tended to be private about the experience, and apparently never spoke publicly about it.

“But in an article in America, Day is quoted telling Daniel Marshall, a longtime member of the Catholic Worker movement, about the horror of the experience. The author of the America article, James Martin, S.J., says this is the first time this conversation with Marshall has been made public:

Then Dorothy said, “You know, I had an abortion. The doctor was fat, dirty and furtive. He left hastily after it was accomplished, leaving me bleeding. The daughter of the landlords assisted me and never said a word of it. He was [anarchist activist] Emma Goldman’s lover; that’s why I have never had any use for Emma.”

Day was well-known for her stance against abortion, but her harsh words also extended to something many in the pro-life movement consider harmless: birth control.

When the topic of genocide came up an interview with Hubert Jessup in 1974, six years before Day’s death, she lumped the contraceptive craze as a eugenic bedfellow with abortion, suggesting that they together defined an age of mass murder:

J: What do you think about genocide?

CLICK HERE to read the article in America magazine