High school student Tom Behan has been writing to Barack Obama daily since the President took office, but it has been a while since he’s gotten any answer.

That doesn’t surprise him, since he’s not a fan of the Commander-in-Chief’s position on abortion. And that’s what the Cinicinnati-area high schooler writes about — daily in longhand.

He has penned a steady stream of daily correspondence to the White House defending the unborn. Although he says that he hasn’t received a response for about the last 500 letters, this hasn’t stopped the high school senior, who has vowed to write one letter every day, by hand, until the day Barack Obama steps out of the Oval Office.

When Obama won the November 2008 general election, “I was way too young to vote,” Behan told the Internet anti-abortion group LifeSiteNews.com.

Behan had just turned 15. However his beliefs about abortion were firm.

“It just angered me how people in general want to get rid of their children, and my sister was trying so hard and she couldn’t,” he said. She had suffered two miscarriages. “So it kind of fueled this passion that never stopped.”

In the very first letter, Behan inked his vow to keep writing until the end of the 44th presidency. The notes are shorter now, but Behan says that the first 300 or so each filled a sheet of paper front and back. Today the letters are approaching the 900 mark.

“Obviously I’ve got the president’s address stuck in my head now,” he says.

The responses, back when he used to get any, disappointed him, he says.

“The first ones that I got back were like, ‘Thank you for your support of the president and his inauguration’ and stuff. And I’m like, okay obviously he didn’t read it.”

He says he got about a half-dozen of those followed by a few general notes of appreciation, and then six or seven praising feedback on the “heart-wrenching issue” of abortion, before they stopped.

If he could get just one message across to President Obama, what would it be?

“I’d talk to him about how much pain abortion has caused, not only to the mother who often later regrets it, but also to other people watching,” Behan said. He also said he would mention that an estimated one third of his generation has been killed by abortion.

“That’s one third of human potential that has just been eradicated,” he said.

And that’s wrong, he says. 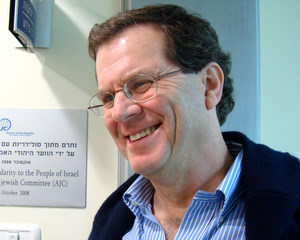 Jewish leader's blog too controversial for America On Line's "The Huntington Post"?
archives most recent
More from Beliefnet and our partners
previous posts