My good friend and colleague at the Hindu American Foundation, Swaminathan Venkataraman, recently had the amazing opportunity to attend the Hindu festival of Kumbha Mela.  Below are a few lovely thoughts he shared with the team:
Today, Feb 10, 2013, a larger number of people than the populations of most countries on earth will gather in a twenty sq. km area to honor a most sacred religious ritual that is thousands of years old. The Hindu festival of Kumbha Mela takes place once every 12 years at Triveni Sangam, the confluence of the Ganga, Yamuna, and the now largely underground Saraswathi rivers. Each Kumbha Mela is the largest gathering of humans ever and the largest religious festival.
30 million people will bathe today alone at the Triveni, while upto 100 million are expected to attend this festival of nearly two months that began on Jan 14, 2013. As the official website below reveals, as impressive as the devotional fervor of the Hindus is the amount of planning and civil engineering that has gone into creating a temporary city to house the pilgrims. With broad and clean thoroughfares, reliable electricity distribution, excellent waste disposal and sanitation, numerous police and fire stations, and a number of temporary bridges across the Ganga, the Kumbha Mela grounds on the riverbed of the Ganga river (the river shrinks during winter when the flow water is the lowest) offer a stark contrast to the city of Allahabad nearby. it is a testament to what India could be, if only planners put their mind to it.
http://kumbhmelaallahabad.gov.in/english/kumbh_at_glance.html

The achievement is evidently impressive enough that Harvard University has sent an interdisciplinary team to “map the metabolism of the city,” according to Prof. Rahul Mehrotra, Professor and Chair of Urban Design and Planning. “While the Kumbh is often portrayed by Western media as a mythic spectacle of colorful humanity, Mehrotra and his team were more impressed with the everyday functioning of the mundane. In a country that can barely keep up with its exploding megacities — where electricity, clean water, and safety are rarely assured for hundreds of millions — how does a pop-up tent city manage to run so smoothly?”

Despite the display of devotion as well as organizational and logistical acumen on such a staggering scale, coverage of the mela in western media tends to be unflattering at best, with no mention of the excellent civic arrangements usually. Media also tends to be obsessed with portraying the “Naga Sadhus”, a marijuana-smoking Hindu sect of sadhus who are often naked, with matted hair and covered with a thick layer of ash, and who usually have the honor of taking the first ritual dip in the river on the holy bathing days.

Who are the naga sadhus? Why are they naked? Why are they known for violence? Why do they smoke marijuana if they are holy men? HAF is asked these questions more often than any others.

During Mughal rule, Muslim violence against sadhus was very high. However, sadhus could not retaliate due to their vow of ahimsa (or non-violence). Madhusudhana Saraswathi, then a Shankaracharya, approached King Akbar requesting him to help curb the violence. Akbar effectively ignored the request, and the creation of the Naga Sadhu tradition was the result. Naga Sadhus are trained to withstand any weather, have no worldly connections or institutional responsibilities, and have no need for clothes. They liberally smear themselves with ash to provide some insulation against the weather. They never initiate violence, but they will retaliate if other sadhus are attacked.  That was the proposition that the Naga Sadhus created. That’s why they have the honor of bathing first at the Sangam in honor of their role as protectors of the other sadhus. Finally, as their role is not to impart spiritual instruction to others, knowledge transfer is not affected by their marijuana use.

Spiritually, they are followers of a great ancient saint named Dattatreya, and they seek to attain his status. Dattatreya was so merged with the universalconsciousness that he cared not in the least for his body, not even enough to wear clothes. The Naga sadhus is a corruption of the term Nanga (meaning naked) sadhus.

At the Hindu American Foundation, we rejoice at this momentous occasion which is literally a once-in-a-lifetime event for those attending. Numerous supporters of HAF have been there in person, many traveling from as far away as America. Below are a few pictures of the mela that provide a glimpse of the insides, and take you where most media coverage does not. 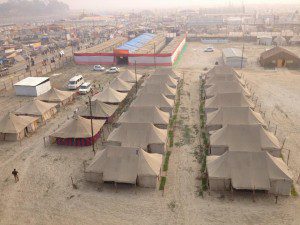 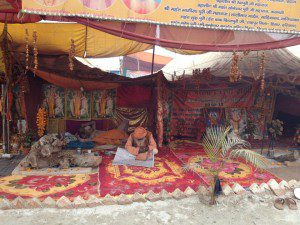 read next post
Happy Diwali: Being like the wick
archives most recent
More from Beliefnet and our partners
previous posts