21 Things You Should Know About Harold Camping

Do you have Harold Camping fatigue yet? I’m pretty close. After a few articles and radio interviews about it (thanks, book I wrote six years ago!), I’m growing a bit weary of the subject. But I also realize that people are VERY interested in it. And I like people to be educated, so here’s one last blog post before May 21. I mean, at least one last post about Harold Camping and Family Radio and all the rapture stuff. I’m pretty sure I’ll be back Monday with some more stuff. 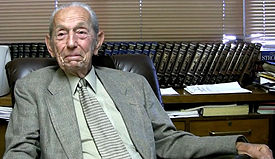 Thus, here are 21 things you need to know about Harold Camping and his May 21 prediction.

1. Harold Camping is not a trained Bible scholar. He has a BS in civil engineering from UC Berkeley. He has not been to seminary. Of course, neither have I, and that doesn’t stop me from saying Camping is wrong. So I can’t fault him for thinking he’s right.

2. But Harold Camping does describe himself as a Bible scholar. In this interview at Killing the Buddha, he said: “I am a Bible teacher, a Bible scholar. For the last 50 years, I’ve made the Bible my university.”

3. Harold Camping doesn’t have much patience for theologians or trained Bible scholars. Later in the same interview, he states, “…instead of having to go through the screen of theologians who have tried to understand the Bible, I found that it was far more efficient just to study the Bible itself.”

4. Harold Camping doesn’t describe himself as a pastor, either. “I’m not a minister. Not a pastor,” he told KtB. “I am a servant of the Lord, declaring what I have learned from the Word of God.”

5. Harold Camping likes math. This comes from his analytical engineering background. In fact, his declaration of May 21 as the date of the Rapture isn’t based on any divine audible revelation from God but from Camping’s unique mathematical approach to the Bible as a code to be cracked. I couldn’t begin to walk you through it — or understand it myself — but as far as I understand, it has to do with Camping’s estimated date of the biblical flood (May 21, 4990 BC) and the verse in 2 Peter about one day being like “a thousand years” to the Lord and how, back then, God warned Noah that he would destroy the earth “seven days from now” and therefore, Saturday is the 7000-year anniversary of the first drops of the biblical flood. So clearly that’s when Jesus will come back. Never mind that I’ve never heard anyone but Harold Camping say the flood began on May 21, 4990 BC. And I think Peter was using the “thousand years” as a metaphor, rather than announcing a mathematical equivalent.

6. The May 21 events will kick off with a worldwide earthquake which starts at 6 pm at the International Date Line and rolls through every single time zone on the planet, every hour on the hour at 6 pm. Totally not making that up. This comes from Camping’s reading of Jeremiah 25:32 about disaster spreading from “nation to nation.” He gets the earthquake part from Revelation 16:18. Not sure where the 6 pm comes from, but that’s what he says.

7. This isn’t a recent prediction. He mentioned its possibility in his book 1994? in which he suggested the rapture might occur on September 7 of that year. But if it didn’t, he said, then it would definitely happen on May 21, 2011, due to a difference in calculations. So give him credit. He’s got quite a few years invested in this prediction.

9. Honestly, I don’t know where the 5, 10, and 17 come from. I’m looking at them in a dense explanatory page on the Family Radio site, and they certainly mean something in a metaphorical sense, but I don’t have the patience to try to figure it out.

10. Despite the complexity of his math and the fact that he is basing it off biblical dates few scholars agree with, Camping is absolutely certain he will not be wrong. He has told his followers and plastered across all his billboards, bus benches and RVs that “the Bible guarantees it.” So if it doesn’t happen, it’s not that Harold Camping is wrong. It’s the Bible that’s wrong.

11. Most of his employees feel the same way. Killing the Buddha also has a fascinating interview with Tom Evans, the media representative for Harold Camping and Family Radio. When asked what he’ll do if he wakes up on May 22 and the rapture hasn’t occurred, Evans says, “I’ve said if you boil everything down, it’s really trusting the Bible. If you can’t trust the Bible, then you got nothing. There’s no truth.” For Evans and others, the trustworthiness of the Bible hinges on Camping’s prediction.

12. But not all his employees feel that way. Evans, the media guy, has had a few run-ins with Family Radio employees who aren’t too happy about Camping’s prediction. Also, Ted Cox, the reporter for that article, saw a memo at Family Radio’s Oakland headquarters outlining the company’s holiday schedule for 2011. Thanksgiving and Christmas were both on the list, even though Camping teaches that the universe will no longer exist after October 21.

13. Harold Camping doesn’t care if you quote Matthew 24:36 to him. That well-known verse states, “But about that day or hour no one knows, not even the angels in heaven, nor the Son,but only the Father.” Camping uses 1 Cor. 2:10-14 to redefine what “no one knows” means, and says that the saved CAN know because they are indwelt by God’s spirit. The wicked don’t know, unfortunately. But even though Matthew 24:36 says Jesus won’t know either, well that’s just wrong, Camping says. Of course Jesus will know. Because Jesus and God are one.

14. I don’t know what Harold Camping would think if you quoted Deut. 18:20 to him. That verse says any false prophet who claims to speak for the Lord — but is proved to be wrong and therefore has spoken presumptuously — should be put to death. I’ve never heard him address this. If you have, I’d love to know what he thinks.

15. Camping, who is almost 90 years old, doesn’t care about his legacy. He thinks that’s a dumb question, because “on October 21 of this year, the whole world is going to be annihilated, and never be remembered. So what legacy am I going to leave to anybody? The only thing is that I hope that there are people who are listening that will begin to plead with God and begin to cry out” (KtB interview). Makes sense, I guess. What good is a legacy if no one’s around to appreciate it?

16. Camping hasn’t been a member of a church since he left Alameda Bible Fellowship in 1988. Not long after, he announced that he had deduced from the Bible that the “Church Age” had ended and it was no longer necessary for any Christians to attend church.

17. Camping says “only a small percentage” of his family members agree with his teachings. He’s got a lot of family members, though. Six living children, 24 grandchildren, 38 great-grandchildren. Presumably, he thinks a lot of them will be left behind.

18. I’m running out of things we should know. I kind of wish Camping had announced that the rapture would be on May 17.

19. One of the reasons he says the Church Age ended in 1988 was because that’s when worldly music began to enter the church. For reals. Jesus is coming back and it’s Chris Tomlin’s fault.

20. Harold Camping doesn’t believe in hell. One of the things that ought to make him a publishing rock star — if only he were younger and wore better glasses — is that he doesn’t teach that hell is a place of punishment for the damned. Camping is an annihilationist. He teaches the unsaved will be destroyed.

21. Harold Camping won’t apologize for his wrong prediction once May 22 rolls around. Most likely he will say that, because of his efforts — and the efforts of his followers — to warn the world of the May 21 event, God has chosen to withhold his judgment for now. And not long after that, Camping will recalculate and announce a new date.

Now you know. See you next week.