Review: Mysteries of the Jesus Prayer

I expend a lot of ink in O Me of Little Faith discussing my problems with prayer. Some of my hang-ups are theological, some practical, some deeply personal. In particular, the theatricality of public prayer — my own and others — rubs me the wrong way. “The reason I keep my eyes closed when other people pray,” I wrote in chapter 5, “is so no one sees me rolling them.” Oh, snap. Kind of a dumb line, but it’s pretty true.

In the book, I write that my prayer life was saved by transitioning from the rambling prayers of my Southern Baptist tradition to the scripted prayers of more liturgical traditions. One prayer I find myself returning to over and over again is the ancient Jesus Prayer:

Lord Jesus Christ, son of God, have mercy on me a sinner.

It’s a prayer that comes from the Eastern Orthodox tradition, adapted from the plea of the humble tax collector in a parable Jesus told in Luke 18. For me, it’s a way for me to pray more, to pray honestly, to pray without getting ensnared by my stupid hang-ups. 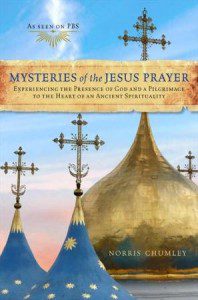 The Jesus Prayer is also the subject of a new documentary and book called Mysteries of the Jesus Prayer: Experiencing the Presence of God and a Pilgrimage to the Heart of an Ancient Spirituality. Written and directed by Norris J. Chumley, a fellow Beliefnet contributor and director of media for Columbia’s Institute for Religion, Culture and Public Life, the film follows Chumley and priest-theologian Rev. Dr. John A. McGuckin as they tour isolated Orthodox monasteries in Greece, Egypt, Romania, Ukraine, and Russia interviewing monks and nuns about their prayer lives — specifically about the centrality of the “Jesus Prayer” in their religious practice.

I haven’t seen the documentary, though it’s airing on PBS this week in many markets. The publisher, HarperOne, sent me a free review copy of the book.

Part of Mysteries of the Jesus Prayer is a personal travelogue, chronicling Chumley and McGuckin’s trips to film these monasteries and their inhabitants. Chumley details the religious history of these places — like the monasteries of Mt. Athos, or St. Catherine’s Monsatery on Mt. Sinai — as well as describing the holy sites once the film crew gains entrance (an often difficult process). The rest of the book tells of the men and women who reside there, much of it by way of their thoughts and teachings about the Jesus Prayer.

I’m interested in the subject, from the prayer itself to the Orthodox branch of Christianity to the holy sites themselves. Some of these places I had already been introduced to in my study of the saints for Pocket Guide to Sainthood. Which is to say: I’m pretty much the ideal reader for this kind of book. I wanted to love it and get caught up in it, but that just wasn’t the case. It reads like, well, a book written as a tie-in to a documentary. A book written by a professional filmmaker. An afterthought.

With such a fascinating subject, a diverse travel itinerary, and visits to some of the weirdest and most inaccessible places on earth, you’d think a ridiculously compelling book would result. But that’s not the case. It’s reverent and devout, yes, but it’s also dry and dull and spiritual/mystical without a lot of questioning or examination.

The point of the Jesus Prayer is to bring soul and body, mind and heart together, in constant remembrance of God in us. In the words of Father Teofil of Romania, its purpose is “to make a link between prayer and mind, between mind and heart, between the power that thinks and the power that loves. So the mind that descends its awareness into the heart is not an activity of the human being, it is a work of God. What we are doing is that we pray to God for the unity of our own being, the whole being.”

I don’t know…maybe it’s better as a documentary. Maybe the wise words of the monks and bishops are more inspiring on camera rather than in print. I hope so. While reading the book, I found myself intrigued by the subject matter but wishing it had been written by someone else, like Paul Theroux. That would have been a spiritual travelogue worth reading.