The Only Horoscope You’ll Ever Need

A couple of weeks ago, the Internet blew up when Parke Kunkle, an astronomy instructor in Minneapolis, noted for the Star-Tribune that due to the Earth’s axis wobble and something called precession, astrologers are currently one month off in their Zodiac signs.

Which means EVERYTHING YOU THOUGHT YOU KNEW ABOUT WHO YOU ARE (based, of course, on when you were born) is apparently wrong.

To make matters even more confusing, Kunkle suggested that astrologers were neglecting a 13th Zodiac sign, “Ophiuchus the Serpent Bearer,” which ought to be added to the original twelve. And suddenly Ophiuchus became the new sign for people born between Nov. 30 and Dec. 17.

Which includes me. Forsooth! Now I am no longer a Sagittarius but some kind of parselmouthed “Serpent-Bearer.” (Here’s a good overview of the whole kerfuffle.)

But I didn’t really pay much attention to the story because this whole astrology/Zodiac thing is absolute nonsense (or to be more accurate, the constellation-alignment part isn’t nonsense, but using it to predict your life and define your character is).

What DID get my attention were a few of the zeitgeist-capturing posts that began to explain exactly why astrology was nonsense.

The absolute best one was this post by David McCandless and the geniuses at Information Is Beautiful. They analyzed the content of 22,000 daily horoscopes at Yahoo and graphed the most common words appearing in star sign predictions. Lo and behold, at least 90% of the words in all the different horoscopes were the same. Regardless of your sign, they were all saying pretty much the same thing.

Here’s the chart they built based on the word frequency. 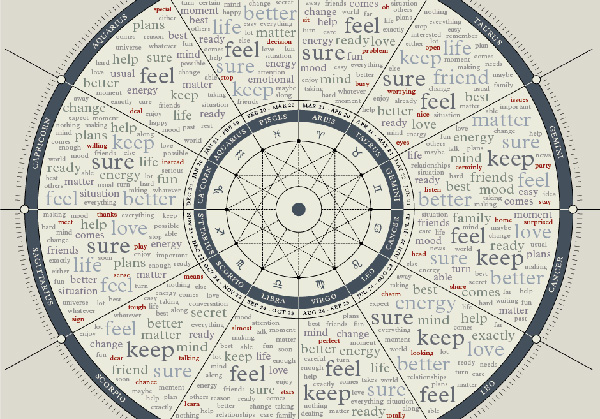 Then, based on the common words, they developed a generic, meta-horoscope for everyone, every day of the year.

Instead of checking yours daily, just read this once and you should be set:

Ready? Sure? Whatever the situation or secret moment, enjoy everything a lot. Feel able to absolutely care. Expect nothing else. Keep making love. Family and friends matter. The world is life, fun and energy. Maybe hard. Or easy. Taking exactly enough is best. Help and talk to others. Change your mind and a better mood comes along…

That’s good advice, friends. I urge you to take it, regardless of your sign.

Alise Wright: Shaken and Stirred
archives most recent
More from Beliefnet and our partners
previous posts