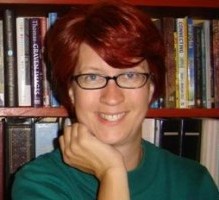 I’m not sure where Trudy Morgan-Cole and I first got in touch — probably through Twitter — but it didn’t take long for me to realize she was funny and honest and a kindred spirit. Trudy is a novelist who writes historical fiction, mainly about biblical women. Her books include Esther: A Story of Courage, Lydia: A Story of Philippi, and By the Rivers of Brooklyn.

She lives in Newfoundland, used to teach high school, and has a master’s degree in counseling psychology. She grew up in the doubt-unfriendly Seventh-Day Adventist tradition, but despite her questions, still attends the same church her parents took her to when she was a child. I can totally appreciate that.

I think you’ll enjoy her heartfelt, honest, and funny contribution to the “Voices of Doubt” series.

I was seven, raised on miraculous Bible stories and missionary stories, and I craved proof of
God’s existence. I prayed earnestly before bed that if God was real, He would turn my red
Squirmin’ Herman toy yellow overnight. (Space does not permit me to explain Squirmin’ Herman
… you’ll have to Google it. Essentially it was a strip of plush fur with eyes. I had no reason for
preferring a yellow Herman; it was a pure test of Divine Omnipotence).

I remember the knot in my stomach as I awoke, the mingled fear and eagerness with which I
peered over the foot of the bed to see Squirmin’ Herman where I had laid him, flat out ready
for God like Gideon’s fleece. I teetered on the edge of faith and doubt, the possibility of the
numinous flooding my pink bedroom, till I saw the edge of Squirmin’ Herman. Still red.

I convinced myself that this was a frivolous prayer, that unlike Gideon’s fleece, Squirmin’
Herman did not merit divine attention. God was off the hook, but the seed of doubt was planted.

For the next thirty years, faith and doubt hovered, one on either shoulder. I believed God
answered prayer, but wondered why prayers for healing or protection sometimes went
unanswered. I believed Jesus was coming soon, but wondered why the Cold War was a clear
sign of His impending arrival when the Black Death or the Holocaust hadn’t been enough to
entice Him down here. I became an expert at quoting proof-texts, but wondered what use those
were in talking to people who weren’t convinced of the Bible’s authority.

Faith and doubt are uneasy companions for any young believer, but I found them particularly
difficult as a Seventh-day Adventist. Most conservative Christians believe that they have the
truth, but few express that idea with the same unshakeable conviction we Adventists do. Among
older Adventists, “The Truth” is sometimes used as shorthand for “the Seventh-day Adventist
church” (as in: “I came into The Truth during an evangelistic crusade back in ’78,” or “I’ve been
in The Truth for forty years, praise the Lord.”)

Adventism is an odd mix of fundamentalist fervor and intellectual analysis. We place a huge
value on higher education; we entice converts into “The Truth” with not with hellfire sermons
(we don’t believe in hell), but with detailed exposition of the 2300-day prophecy of Daniel 8
(complete with charts). Adventists are expected to be well-read, Biblically literate, and able to
argue fellow Christians into submission or exhaustion on subjects such as Sabbath-keeping or
the state of the dead.

But along with this cerebral faith comes an assumption, one shared by many Christians, that
there are barriers intellectual curiosity should not cross. Ask questions, search the Scriptures
for answers – but don’t ask too many questions about the Scriptures themselves. Don’t search
too widely for answers, lest you stumble over ideas that will cause you to doubt. Doubt is
not, perhaps, the unpardonable sin, but it’s one of the last things you’d want to admit to in an
Adventist Bible study. It’s almost as bad as smoking.

During my years attending a church college and teaching in church schools, I sought certainties
to buoy my faith and avoided questions that might capsize it. Then I took a break from teaching
to devote my attention to child-raising. Some days One Fish, Two Fish, Red Fish, Blue Fish
didn’t provide quite enough intellectual stimulation, but fortunately the internet had been invented just in time for me to waste hours on it.

Faceless strangers in online discussions challenged me with questions I wouldn’t have been
willing to raise at church. An atheist mocked me – justifiably – when I confessed I was “afraid” to
read a particular book because it might shake my faith. “What kind of faith can be destroyed by
exposure to new ideas?” he asked.

I began asking the questions that troubled me most; I devoured the books I’d been scared to
read. I didn’t stop believing in God, but I began to question how well I knew Him.

One day, on one of those discussion boards, someone raised a concept that blew my mind.
It had a fancy theological term and a quote from a famous theologian to back it up, and
unfortunately I can’t remember what either of those were. All I remember was the gist of this
radical idea: It’s OK not to know all the answers to everything.

I realize most people already get this, but for me it was huge. That little ship of faith that was in
constant danger of being swamped by doubt – I’d sailed as if I were responsible to patch every
hole, mend every rip in the sails. I’d thought I had to construct a watertight faith using only the
materials available to me. Now I considered the possibility that I was, in fact, being carried all
along, that grace could cover not just my sin but also my doubt.

That guy in the Bible who, when Jesus challenged his faith, replied, “I believe, help Thou my
unbelief!” is my patron saint. I believe, and I don’t. I have faith, and I doubt. Squirmin’ Herman
remains red despite an omnipotent God. I’m learning to live with that.

Thank you, Trudy. Keep up with Trudy Morgan-Cole by following her on Twitter or at her blog, hypergraffiti. You can find out a lot more about her novels here.

read next post
What Are Your Christmas Traditions?
archives most recent
More from Beliefnet and our partners
previous posts